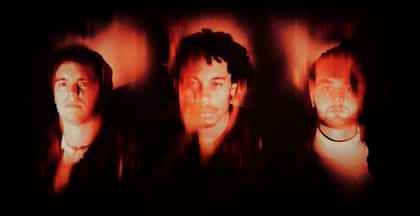 What Pretty Embers may lack in lyrical dimension they make it up for in musical diversity. The songs written for their debut collection Under stand out thanks to a consistent voice sustaining them over the course of ten tracks. There are some key variations along the way, but the bulk of the band’s songs finds its narrators mired in several degrees of self-loathing. Lead singer Kameron Mitchell does, to his credit, perform a bit of sorcery on the lyrics. These straight-forward monologues in song written in conversational lines take on the aspects of performed poetry thanks to his suggestive voice.

Mitchell is joined by longtime friends Ethan Standard on drums and bass player Mason Thomas. The former’s impressionistic guitar playing, rarely wearing any trappings of traditional rock lead guitar, lays more responsibility on the rhythm section to maintain a steady foundation. Melodic and/or orchestral guitar falls apart without this spine keeping things upright and steady. The opener “For You” is a great example straight away. It’s Standard and Thomas who are in near-constant motion during this track, maintaining a restless yet spot-on groove while Mitchell’s guitar weaves a painterly-like effect over the verses and elsewhere.

“Inside” is an example of the same method amplified by a factor of ten. Pretty Embers’ compositional personality has a penchant for emotionally claustrophobic musical narratives. This means that every sound, even the vocals, is given a close quarters treatment, intimate, within “arm’s reach” of listeners. It promises interiority and delivers. It’s Mitchell delving deeper into his dark corners than elsewhere, but the arrangement, as before, mitigates its unremitting lyrical point of view. The guitar playing is particularly good on this.

The album’s fifth and sixth tracks, “In a Few Weeks” and “Losing Sleep”, share common traits. Both rely much more on acoustic accompaniment than other Pretty Embers songs though Mitchell and his cohorts cannot resist adding low-key full band flourishes into each performance. The vocals for “Realize” are among the album’s finest, the melody especially. One gets a sense of the band stretching some with this track though they are as careful as ever to never take on more than the song asks. The keyboard parts add ear-catching streaks of color and the shimmering passages part of the song’s second half are among the album’s best moments.

The dreamy drift of the album’s penultimate song “It’s Not the Same” runs on a little too long, but others will disagree. It keeps the same high degree of musicianship that’s defined earlier songs but succumbs to a temptation for meandering. There are few such moments on Under, however, and those you may encounter don’t sabotage the collection. Pretty Embers has produced a debut with substance and entertainment value. It is the first building block for everything that comes after. Based on its strength, listeners can be confident even greater times are ahead. Check out Under as soon as you can if you like moody and musical inventive alternative rock that isn’t beholden to the past in any way.