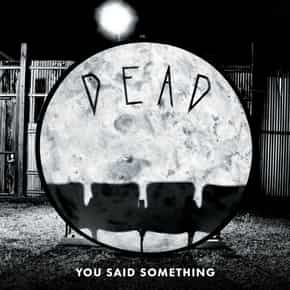 Dave Boone’s Alberta and the Dead Eyes has likely settled on its peak lineup. The original three piece of Boone, drummer Erik Washington, and bass player Bhuti Bhuti drafted Ashlan Ounanian into the band and the results are transformative. Ounanian’s lap steel and additional percussion extends the Dead Eyes’ musical reach without ever spinning the unit off into unfamiliar terrain. The resulting new album You Said Something features the band in fully-realized form and Boone supplies them with his best songwriting yet.

It’s a winner from the first. They shake you out of your lethargy with the unexpected opening for “Whistle Me This”. Their slant on this kick-off track is unusual; drummer Erik Washington borders on bombast here and elsewhere without ever going over the edge. There’s many shades and nuances detectable in the album’s production. As an example, one track will put Washington’s drums front and center while others will move his playing deeper into the mix.

“Belly” has one of the album’s most distinctive guitar lines. It may be lost in the general “strangeness” of Alberta & the Dead Eyes’ song craft but their melodic talents are substantial. This track puts the spotlight on it like few others do and Dave Boone’s vocals respond in kind. His voice has a great deal of character; it alternates between quaking emotion, skepticism, sarcasm, and a gamut of other emotions with seamless skill.

“Lil’ Bird” is another song spotlighting their gifts for melody. Boone’s singing sounds genuinely inspired by the arrangement. It’s obvious his lyrics revel in wordplay, but it’s never ornamental. His capacity for musical invention extends to his language as well and the poetic qualities of songs such as “Lil’ Bird” cannot be denied. “Topless” shares similar lyrical excellence. The musical arrangement complements it with the weary crawl dominating much of its arrangement. Alberta & the Dead Eyes have a wont for changing things up during songs, however, and “Topless” is no exception.

They scale another peak with the track “Blush”. It’s difficult to categorize or describe. Keen-eared listeners will identify several competing influences running through “Blush” and the imaginative arrangement succeeds despite a remarkable lack of clutter. Listeners will be riveted most, however, by Boone’s memorable vocal. The blues “Medium Talk” is far from purist, of course; the Dead Eyes would never limit themselves that much. It’s another dramatic track even if its utilizes a different approach compared to earlier songs.

The last song “Nice” ends You Said Something on a breezy but substantive note.  The deceptive lightness of the track masks another poetic lyric from Boone and the chorus stands out on an album teeming with such moments. Dave Boone is rightly proud of the band’s latest incarnation and the work they’re releasing with this album. You Said Something covers ample stylistic ground while never taking too many left turns that leave listeners behind. It’s a worthwhile listening experience for serious music fans and rewarding long after your first encounter. Alberta & the Dead Eyes are far from a cookie cutter act.