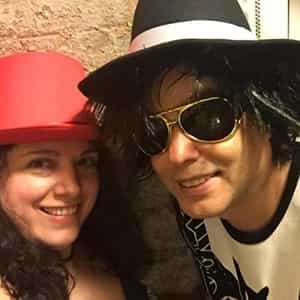 Husband and wife duo, Makar, have another cooler-than-you-think gem with their new Halloween-inspired hit, “Zombies Have Rights Too”.  Or is it inspired by the undead? Perhaps a nefarious monster is behind the song, or maybe it’s presented as a nod to the folks that just don’t get the same attention or love as they deserve. The tight sound, the airy melodies and the quirky beat is what makes Makar oh-so-good. Makar, the band behind the hit “I Hate My Job” and the band that Rust Magazine proclaimed their sophomore album Funeral Genius an indie rock masterpiece, has plans to release the album Fancy Hercules November 19th.

An acoustic guitar sifts through the music bed, strumming along as if it were mining for deeper thought and extra meaning. That guitar is embolden, with just a hint of intricate blue notes. The electric keys are fashionable, with imprints of the city’s worn streets, as if the urban jungle were a blanket of notes. Where the juxtaposition really gets all the more interesting are the vocals. Andrea DeAngelis seemingly glides her vocals along like butter to bread. There’s something both angelic and eclectic about her voice tones that you find yourself mesmerized and simply transfixed. I also found her voice to possess a shyness, a modesty.

I don’t think she’s hiding in the shadows, per se, but mirroring the contained or the reservation someone seeking love has. Some folks have anxiety or just like to be observers in life – I think she grabs hold of that feeling. DeAngelis’ husband and bandmate Mark Purnell, appears to be tackling the keys, and flavors the song with additional texture and emotional pull. In the song’s music video, the two are quite the pair, and you can understand and feel that monster and zombie synergy oozing from the screen. I wasn’t expecting a gaudy sound, nor was I expecting a song that was so hauntingly beautiful. Do I think it’s odd? Yes, and that’s what makes it so wonderful.

This song moved me in a way that felt differently than from cliché or seasonal music can do. I felt like there was a deeper layer to this, that the idea of being isolated and alone is universal. I think in a lot of ways, as a society we are zombies. We are always looking ahead, and not always truly looking at the people around us or even in the mirror. Makar is onto something really special. I think fans of the band will embrace this laid-back sound, and be thrilled at their ingenuity. “Zombies Have Rights Too” is a unique sound.

I’m sure you can glean that from the title alone, but it’s worth the listen. If you’re a fan of MGMT, The B52s, R.E.M. and The Velvet Underground, I’m positive you will appreciate this art-house meets rock meets folk song. These indie New York rockers are one to keep an eye on and have on your musical radar. “Zombies Have Rights Too” is a definite yes to add to your playlists.