Tarot Cat’s “Am I Dreaming” 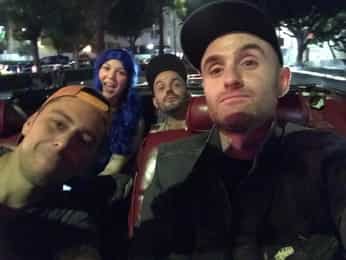 Big, loud, aggressive, and slightly industrious; Tarot Cat’s “Am I Dreaming” isn’t pulling any punches with the audience, and if you’re not careful, its oversized beats are almost certain to pummel you this autumn. Instead of hammering out a retro-punk anthem like a lot of their contemporaries have been, Tarot Cat is going a little more avant-garde with their style in this performance and making it more than clear where their values lie on the aesthetical spectrum. Instead of trying to cleanse the hook with an acerbic bassline, the mud is left to run wild as the vocal crashes into the percussion and draws chaos from chaos.

There’s nothing wrong with bringing in a taste of excess when it benefits the core narrative of your artistry in the way that it does for this band, and in “Am I Dreaming,” I think we get the best depiction of who these players are to date. It’s not pretentious and, better yet, it’s easily one of the rawest and unfiltered looks into their creative persona you’re likely going to get without seeing them smash through this song in a live setting.

“Am I Dreaming” is admittedly all muscle when it comes right down to it, but this isn’t to say that there isn’t some detail in all of the madness we’re listening to. In fact, I think that the way the arrangement is stacked together hints at a great complexity in this band’s sound than what we’re even being exposed to here, and I say that having only gotten turned onto their discography after the release of “Am I Dreaming.”

Tarot Cat takes the production route of retaining the natural grit in their sound rather than trying to give us pointless white noise and fake intensity where there would otherwise be none, and that alone goes a long way with me as a critic. Not only do these musicians have nothing to hide but they’re confident in showing us exactly what they’re capable of, which is more than I can say for some of the other bands out on the circuit at the moment. Tone is important to Tarot Cat and it shows, and this is a great part of why I think “Am I Dreaming” sounds like the sort of a one-off juggernaut that rock needs right now to sound a little more familiar and furious once more.

It’s a new age for the punk aesthetics we grew up on, and if you’re wondering where to turn for the hottest licks coming from the left side of the dial, starting with Tarot Cat might be a good idea right now. They’re not into the self-indulgence that so many of the other acts I’ve been listening to in the last few years have been but instead a refreshing, cut and dry stylistic attitude that has a place not just in punk but in all of rock n’ roll. I want more of what I’m hearing in “Am I Dreaming,” and I want this band to explore as much of their depth as possible.