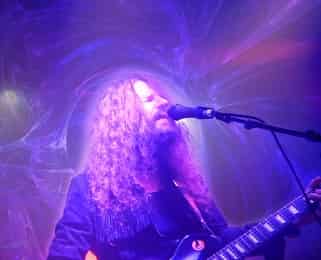 High contrast and low-fidelity, Andrew Reed & the Liberation’s music video for “Twisted World” is both visually enrapturing and sonically demanding of our attention, pushing the line between modern and old school post-punk conceptualism more than enough to be considered an instant classic. Reed slams us with layer upon layer of melodic noise, but at the heart of his performance exists a harmony as gilded as something out of The Beatles’ discography would be. Call it retro if you will, but the pop aesthetics here are something to behold – especially given what they’re surrounded by.

The instrumental elements in “Twisted World” feel rather complicated when listening to the song for the first time separate from the music video, but you’d never know as much just from judging the swaggering demeanor of the players. Reed in particular is a beacon of cool behind the microphone, depicting emotions through faint poeticisms that could be interpreted a number of different ways. If understanding the narrative from a romantic perspective, this is a single that carries immense pain on its shoulders, though it doesn’t seek to shoulder its angst with the audience; this is joint commiseration at its finest, in my opinion.

I’d be lying if I said that I didn’t hear a lot of retro shoegaze and soft goth in this piece, but I also wouldn’t go as far as to say that Andrew Reed & the Liberation sound like a band removed from their rightful time. Contrarily, I think that while it’s clear who their influences are, this isn’t a band interested in trying to recreate something from the past, nor live up to the standards of a specific group of critics more than ready to find themselves consumed in a debate over scenes, eras, and those who transcend the two.

While I didn’t know about Andrew Reed & the Liberation before they dropped “Twisted World” just recently, I’m very curious about the kind of heat they’re bringing to the studio and beyond in this song. There’s an interest in guitar-driven rock growing out of the Americas right now that hasn’t been present on the mainstream level in a minute, and if there’s one act likely to capitalize on it without giving up the DIY aesthetics that are essential to maintaining your soul in this industry, it’s these guys. Charisma is everything in rock, and they’ve got it in spades this autumn season.