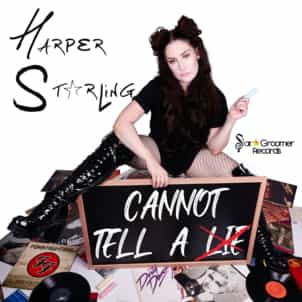 As far as beats go, there’s never been a Harper Starling song that didn’t feature something worthwhile. In fact, for as gifted a singer as she is I actually think that Starling’s artistry is more reliant on percussive prowess in making a statement than it is her crooning abilities. It’s undeniable that her voice is the cherry in “Cannot Tell a Lie,” but between the enormous grooves in the track, I think we’re able to appreciate how golden a set of pipes she has no matter what the backdrop she’s given. This was made for the dancefloor, but it will likely have a life well outside of the club this winter.

Starling attacks the verses pretty hard in this track, and while she doesn’t have to be quite as aggressive as she is – especially closer to the latter half of the song – her willingness to go a little heavier with the harmonies definitely adds a romantic sensibility to the single that wouldn’t have been here with another player in charge of the details. “Cannot Tell a Lie” could have been structured with a slower beat and still felt very smooth, but with a bit more kick I think it sounds a lot more urgent and fierce.

It’s rather interesting to compare the substance of this performance with what we get in “Snow Cone Christmas,” because while the songs couldn’t be any more opposite in terms of cosmetics, they’re built on the same natural charm that Starling gives up in every one of her songs. No matter the tempo or the tone of the lyrics, she’s bringing her a-game, and I think that anyone who doubted her capabilities as a versatile player in this game is going to have a major change of heart after hearing what this latest release is all about.

This is a great song from a very skillful singer more than on her way to the bright lights of the primetime, and although it doesn’t have some of the black and white minimalisms a lot of the other pop music I’ve been following in 2021 does, its greatest attribute is standing apart from the crowd. Harper Starling has a mission to break away from the melodically underwhelming, and to me, she’s accomplishing it all too brilliantly with material like this. The mainstream needs more players like her, and she’s proving that every time she gets into the studio.