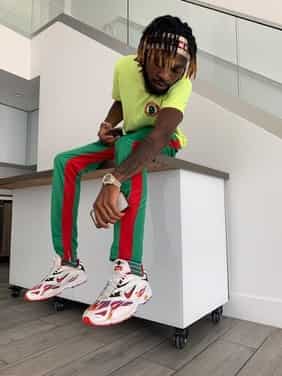 Rap is no longer on the alternative end of the spectrum – truth be told, it’s the definition of mainstream in 2021. Even with this being the case, there’s still a lot of artistic credibility to be found in the underground pulse hip-hop has always prided itself on; take for instance the emerging talent of one Vikki Sota, whose new EP Genesis is making noise before sharing a single note of its tracklist. Vikki Sota exploded into relevancy with the release of his music video for the song “Run up my Bands” earlier in the year, and although a new face to most in the rap community, right now he’s playing like a rapper with everything to prove (and giving up some incredible beats in the process).

Say what you will about cosmetics, but I for one have always been more intrigued by the personality of a performer than the bombast they employ when trying to make a music video or even put on live performance, and Sota is a man with a lot of charisma to be enjoyed. He’s able to go with the flow of things, even in a rigid arrangement of beats like we find in his single “Swimming,” and this ultimately affords him a lot of extra privilege that his contemporaries just don’t have access to. His sublime attitude is going to be a factor in how well-received Genesis is, and my gut tells me the strength of its songs will lie in the identity lent to them by this very skillful rapper.

I want to hear a collaboration between Sota and a female voice in the game today, mostly to find out how well he can balance his tonal output next to a singer or rapper with a slightly different pitch attack than he’s working with. He’s able to manage melodicism (this much is demonstrated in his first two singles without fail), but I want to know what he can do when he’s next to someone else putting their own angle on a performance. Genesis might be a solo-only venture, which is perfectly fine for me as both a critic and a new fan of this musician, but it would be foolish to leave this man in the studio booth all by himself forever.

Though I’m fresh to the new music Vikki Sota is recording at the moment, I’m not planning on straying from his sound in the future, as he’s very obviously on the verge of coming into his own a lot quicker than any of the other rookies I usually cover would. There’s something about him that screams the ‘it’ factor, and while I can’t say for sure which aspect of his performance depth I like the most, I don’t know that this is a bad thing. He isn’t a shapeless songwriter by any measurement or standard, but someone versatile enough to fit the mold of the moment, and that could be why I’ve had such a keen interest in following Sota’s story since first hearing his music.