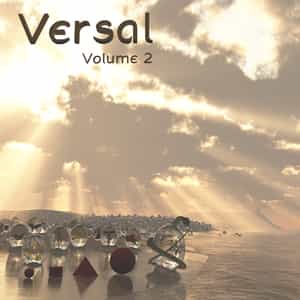 Despite being a one-man operation, Versal manages to produce a litany of colorful tones and textures in the new album Versal Volume 2 that sound like a symphony more than they do simple electronic melodies woven together by a steady hand. Where a lot of other electronica efforts have been leaning on the avant-garde in both the mainstream and the underground in the past few years, Versal’s latest release sees him flirting with atmospheric elements in small doses, such as in “Pencil Strokes,” with more straightforward, fantasy-style melodies coming into focus for songs like “Stages” and the delicate piano number “Simply,” both of which are compositional masterpieces on paper. In terms of execution, he’s on top of his game here for sure, and giving us just the sequel we wanted to hear.

“Kind of Pink” incorporates lo-fi, post-punk, and moderate neo-funk themes into a singular performance, but not once does it sound spread thin. Contrarily, I think it holds up as well as the more complicated, slowed-down “Vivi Aquas Montserrate” does, or even the retro “Your Eyes.”  Versal isn’t an artist who leaves details to chance, and if that wasn’t the core narrative surrounding his output prior to hearing this latest LP, I think it will be once it gets a little more attention from college or mainstream radio. As a performer and arranger, this is someone who values intricacy even more than they do the fanciful production themes a lot of other artists would just as soon model their entire careers around.

“The Guardians of Montserrat” and “Departed” couldn’t be any more different in terms of their key aesthetics, but they mesh well together here because of the progressive fluidity we find closer to the latter half of Versal Volume 2 than we do the former. I don’t think this was meant to be an outright concept album, but there’s something to be said about the way everything gels together here, even when the cosmetic elements are opposing in virtually every department. It’s an experimental album, there’s no getting around that much, but to say that Versal Volume 2 isn’t one of the more compelling records of its kind to land on store shelves in a minute just wouldn’t be doing it, or its creator, the justice they deserve.

Versal first came to my attention with the release of his self-titled debut EP some two years ago, and I think that in the time he’s had to evolve since dropping that initial offering, he’s made quite a few improvements to both his technique and his perspective when it comes to performing. He always had the right idea, but this is a little more complete and full-bodied than I had originally thought him capable of producing. This is an excellent look for the present stage of his career – and a good glimpse into what he can still offer down the line.