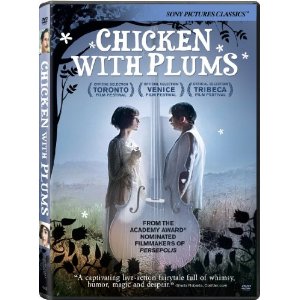 Chicken With Plums focuses on the life of Nasser-Ali Khan, a masterful violin player. When an unfortunate act leaves eir violin in shambles, Nasser-Ali completely gives up on life. Not moving from eir bed, a period of self-realization has to occur to make Nasser-Ali’s life whole again. What Khan ultimately figures out in this dark period is the reason for taking up the violin in the first place. The broken violin represents the love that eir had; rather than suffer, Nasser-Ali realizes that happiness can still lead eir life.  The cast of Chicken With Plums deftly create a narrative that will capture viewers and not let them go until the final credits roll.

Chicken With Plums contains featurettes that further increase the value of this DVD. This means that there is a commentary that is laid down by the directors of the film, Vincent Paronnaud and Marjane Satrapi. What is already a detailed and intricate film in Chicken With Plums is given further depth after one watches the film with the commentary. Further context is provided to the film when viewers take in the question and answer session that occurred at Tribeca; the theme of love representing the fundamental force in living seems to draw back to classic works such as the Odyssey and O. Henry’s “The Gift of the Magi”.

Chicken With Plums is available at a number of online film retailers. Check out the Sony Classics website for more information about their 2013 films, as well as those titles that are present in their back catalogue. The film will impress through its treatment of reality and those matters that would otherwise be hard to reconcile.