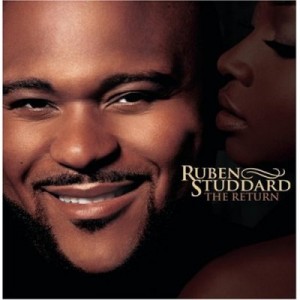 For those individuals that have been living under a rock for the last five years, Ruben Studdard was one of the American Idol finalists. This is actually eir second album; eir first album, “Soulful” had the catchy song “Sorry 2004”. However, this album starts out very weakly. The first track on “The Return” is the title track, which has the unfortunate tag line of “Of The Velvet Teddy Bear”. I understand that this is supposed to be a catchy, more R&B type of track, but any catchiness present with the hook is diminished by the goofiness of Studdard standing in as a “Velvet Teddy Bear”.

The drums that start out “Change Me” are pure early-nineties cheese; the lines sang by Studdard on this track are removed from this dated sound and fits them in between the work of a Joe and Bryan McKnight. “Change Me” barely cracked the Hot 100, but it deserve being bumped up about twenty slots from that. However, this is not the level of a “Sorry 2004”; the opening of “Make Ya Feel Beautiful” does not help “The Return” out in the slightest. The fake scratchiness of the composition, ostensibly to create a more close feel for anyone listening in, is lost on the vocals on the track. The flow finally reaches some level of decency during the chorus, but the lengthy times between choruses sinks this track by into the morass.

“Get U Loose” is another track that does not really impress, even if the instrumentation breaks free of the eighties/early nineties sound that inexplicably is present throughout most of this 2006 release. Ruben Studdard uis at a point during eir career that ey can either try to reinvent eirself or create more albums that are similar to “The Return”. If ey is willing to reinvent, the results will be impressive. However, if ey just tries to recreate “The Return”, chances are good that we will not hear much else from this crooner in the next few years. There are only a few tracks of any consequence during this album; while it is true that Studdard can sing, there are few tracks that could be at the level necessary to burn up the charts on “The Return”. If you are an American Idol completist, buy this album. If not, avoid this and see if Studdard does any better with eir next album.

Top Tracks: Change Me, Our Story