We’re sitting down with Jupiter in Velvet. It’s been a while. What has the band been doing this last year? 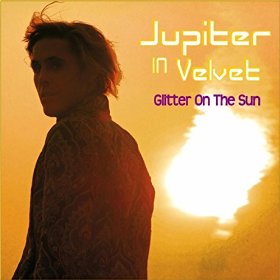 Glitter On The Sun is your latest album. What does it add to the story that is Jupiter in Velvet?

Glitter On The Sun is a wide swath of musical styles, sounds and subject matter.  But more so than the first two albums, I chose songs for Glitter that were more immediately accessible to new listeners.  Glitter On The Sun was meant to shine so bright that it would be hard for people not to notice so that I could reach more people with my music.  One other aspect of this album that I am very pleased with is that I was much more demanding of myself to come up with more original arrangements, unusual chord progressions and compelling lyrics.  It is easy to write a song and then put it together like you’ve done before or like what you hear from others.  So I rejected some of my initial arrangements, and really pushed myself to reach for something more interesting and fresh to the ears.  One good example of this is the song ‘Fighting Lions’.  It is certainly not meant to be a mainstream radio song, but it is unique and takes you on a trip.  So Automatic is another example.  It turned out very differently than I originally heard it.  In fact, I didn’t know what to make of it when I finished it.  There was something very powerful about it, yet it seemed kind of esoteric to me.  Yet everyone I played it for, even friends who aren’t particularly into my music really liked it.

We talked about your current music briefly, but what is the one song that you still go back to and think “man, I’ve done it – this is great”? Why is that?

I am always after that shining moment when I will write ‘the song’, and so many times I have thought that I had it.  But then when I am done, there is always this feeling that it was close but not quite ‘the one’.  I am super critical of myself and my music, and I seem to remember my albums as being rubbish until I play them again.  Then I go, ‘well, that actually is pretty good.  So if there are any songs of that category and I include the recording itself, I would say ‘Love Is On My Side’ from my ‘Screaming the Love Behind the Scars’ album and ‘So Automatic’ from ‘Glitter On The Sun’.  And I say these two not because I feel I have recorded a classic, I haven’t done that, but because I always enjoy listening to them, they always excite me.  Why?  They give me the feeling of songs I loved when I was growing up, that I listened to over and over because of how they sounded and how they made me feel.

What has been your most memorable live experience?

Starting out with a band named ‘Woolton Parrish’, we played a ski lodge to an audience of 12 people who seemed to be watching the ski crash videos on the bar TV’s more than us, while our sound guy kept sticking his head into the PA speakers and walking across the stage while we were performing.  It all ended blissfully with a power outage that left us in glorious darkness.  We definitely knew after this show that we were on a way to greatness.

The seed of a song springs forth in various ways.  I have a time first thing in the morning after I get up when I sit down to work on songs in development, practice finished songs, and just follow little spontaneous happenings to a point that I hear and feel something compelling, or I am bored and I then drop it.  Once I have a riff, melody, chord progression, bass line or even just a song title I really like, I work on it every day to see where it goes.  I’ll make little recordings of the song in development on my cell phone.  If I am compelled to finish the song then I will rehearse the song for a long time to see how it develops, what else I hear in my head for the song and finally, whether it is a potential keeper to record later.  After I finish an album, I begin a list of potential songs for the next album, new ones, older ones, work in progress songs that I really like.  Then as the months go by I whittle down a large list of songs to a smaller core group that I feel very, very strongly about, and that I know will be the core of the new aIbum.  I will then make a rough recording of these songs on a little 4 track to see what other ideas come out for the song that give it more substance and depth.  I think that the most important part of development in my songwriting is rehearsing a new song for a number of months to really feel it and hear it in depth in my head.  That way I have learned how to sing it well, and the arrangement is very worked out before I begin recording.  I also do a lot of arranging when I take a bath before I go to bed.  The song will play like a radio in my head and I hear lots of other parts to consider.

What process do you utilize concerning the ordering and ultimate decision concerning whether you put a track on the album?

Well, like I described in my last answer, I have developed a very strong feeling for most of the songs that I decide to record for the album by rehearsing songs for many months.  If the song grows on me as a learn it and am able to hear it more in depth in my head, if I enjoy practicing the song, then it has a very good chance of making the album.  There is also a part of me that is a critic, who sits back and evaluates my songs from a distance.  Yes, the song may be enjoyable for me to play because it is personal and I feel it, but what is there for others?  Is there a unique sound?  Do the lyrics speak in a way that others can apply them to their life?  Does the song have compelling hooks that will draw the listener in?  I write so many songs, that I try to separate out the personal value of a song from the song’s ability to have meaning and appeal to others.  The ordering of the songs just seems to evolve on its own as I hear the finished songs.  I think of the ordering of songs on an album a bit like a set list for a live show.  Trying to always keep the listener interested and compelled to want to hear the next song.

Twitter is definitely the best social media for myself to promote my music and try to reach a new audience.  Facebook is pretty good too.  Reverbnation is valuable as well but it is more of a way of connecting with other musicians.

What sort of plans does Jupiter in Velvet have for 2015?

I will be putting a band together and touring, and recording a new album for which I have most of the songs written already.  It looks to be a harder edged album as a whole.

Well I hope I have intrigued them enough to check out my music!  You can stream my Glitter On The Sun album at my website, which is listed just up above.