With horse racing season having come around once again, we take a look at Derby Quest, one of the few smartphone games that are able to capture the essence of the horse racing industry. In the past few years, we’ve seen smartphone games branch out into some unique genres and categories, relying on the convenience of the platform to try and get more people to play games.

Mobile has made casual gamers out of everyone, including the horse racing enthusiast, and Derby Quest has emerged to bring them the game they yearn for. 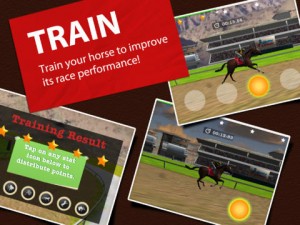 Derby Quest is a game that’s developed and released by Tapsy. Available on both the iTunes App Store and the Google Play Store, the game puts players in control of a stable, where they do their best to raise, breed, feed, train and race their horses to become Derby Champions. Not to be confused with Com2us’s Derby Days, the game is an actual simulation of raising and racing horses rather than a city builder with unicorns and winged horses. Derby Quest strives to be as realistic as possible, and this is certainly something that we can appreciate in a game that targets such a niche audience.

The game starts off with you in possession of a new stable that you must then populate with champion horses through breeding. The first screen you encounter will teach you how to breed two of your horses, and how the stats of each horse parent will affect their baby, and then you’re on your way. You can customize your horses’ equipment, as well as your jockey’s, with equipment affecting how well you perform in the races. 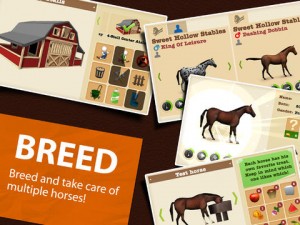 The end goal is to become the most successful stable in the derby, with hundreds of well-bred, happy horses ready to win at races and rake in the cash. Will you follow in the footsteps of Paul Nicholls, who started out managing a stable with 8 horses in 1991 before becoming one of the most respected jockeys and trainers, writing columns for Betfair while managing his award-winning stable? Or will your derby days be cut short by bad business decisions and an inability to keep track of what your horses like and what to feed them? The game gives players plenty of customizability, and it’s easy to make some game-breaking mistakes early on.

Unfortunately, as promising as the game is, its limited audience means that it doesn’t get quite the amount of attention it deserves, and Tapsy has all but stopped support for the game. It hasn’t seen updates in over a year, but with so much to do and the game being free, it’s a great choice for horse racing fans who want to get as much action as they can in between actual races.