The Scottish pop band with the American name is yet another example of a great band that does remarkably well across the globe, with the exception of here. Despite some decent attempts over the past two decades, of the band’s eight records, only one (their 1989 debut, Southside) showed up on the U.S. sales charts, only reaching #88 before disappearing. 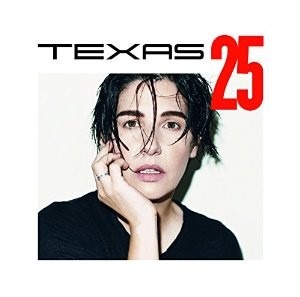 The just released anniversary set, 25, is a decent consolation then to U.S. fans who have been waving the flag of support for Texas in vain for the past two and a half decades. Serving as a greatest hits plus, the standard version includes a dozen tracks, including four new songs. Among the obvious “best of” highlights here are “Black Eyed Boy,” “The Conversation” and “I Don’t Want a Love,” but it’s “Superfly Boy,” one of the newer tracks, that serves as the standout song in this solid collection.

All of the songs here have been reworked and re-recording proving the band is just now hitting its stride. With more than 30 million albums sold across the globe over the past 25 years, you’ve got to wonder exactly why so many in this country have been missing out for so long.