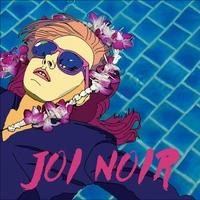 Asphodel is the first track that many well hear from Joi Noir, and it is a hell of a how do you do; the track is able to take up the goth, new romantic, and girl-rock (Bangles, Runaways) styles of the late seventies and the early eighties. Rather than merely looking back, there is a vitality that the band creates that makes each of the tracks on this self-titled album shine in the current era. Cake (The Queen is Dead) is the first single by the band, and it builds off of the work of Bauhaus and Three Imaginary Boys-era The Cure. The song tattoos its sultry melodies deep into the psyche of listeners, while the confident and intense vocals heard here utilize the Sisters of Mercy and 45 Grave as a blueprint. All My Life is one of the most fascinating tracks on this eponymous albums. Joi Noir is able to cultivate another slice of the same rock / punk / goth style with this track, but there are hints of later (Rites of Spring, Replacements, and even late-nineties AFI) bands that can be heard here. This cut provides the momentum that listeners need to complete this album; fans that want a catchy radio-friendly track can find it here, while those that require intricate and intense compositions will be floored by what they hear here.

All Day All Night concludes this title, and represents a rare example of a track that concludes the album nicely while showcasing the styles that the band can take on subsequent albums. For more information about this unique band, make it a point to visit the band’s domain or SoundCloud profile.

Top Tracks: Cake (The Queen is Dead), All Day All Night