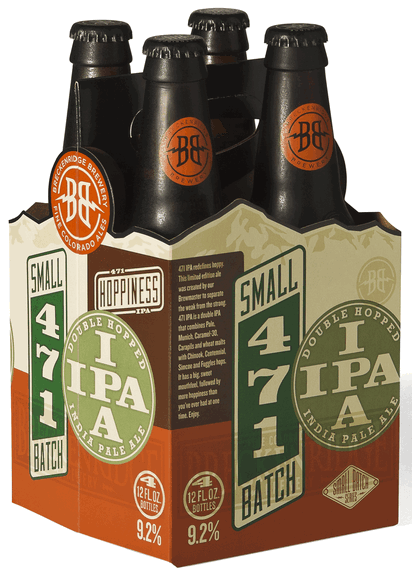 471 Small Batch IPA is a double/imperial IPA created by Colorado’s Breckenridge brewery. The effort pours with a deep yellow to brown coloration and a decent amount of off-white head that sticks around through a glass. The nose of 471 links together grain and floral elements with a hint of spice. An initial sip of this imperial IPA showcases a luxurious mouthfeel that successfully sails between the thickness of typically present in darker styles (stouts and porters) and the lighter, effervescent approach of garden variant IPAs. The initial flavor profile of the 471 Small Batch IPA yields a good amount of brown sugar and a strong hop element to the beer. Hints of citrus fruits (orange, grapefruit) become evident the further that one gets in to the 471 Small Batch IPA, moderating the sharper edges of the beer. Toasted malt is present as well in the opening, working well to round out the sweeter side of things. The sweet/malt dichotomy gradually moves to the periphery as the bitterness of the hops becomes ascendant.  The high ABV and strong hop presence of this brew means that the 471 Small Batch IPA stays remarkably coherent, rather than breaking down as it approaches room temperature.

The alcohol bite is the perfect thing to keep an individual warm as the temperatures continue to dip; Breckenridge is currently offering a Hull Melon Barrel Series variant in bottles and on draft that looks to further increase the complexity of an already deep and bushy beer.

Check out our previous coverage of other Breckenridge efforts, including coverage of their Breck IPA  , Christmas Ale  , and Buddha’s Hand  . For more information about the brewery’s year-round and seasonal offerings, visit their domain. Further info about new product releases and events are present on Breckenridge’s social media accounts.