The HBC-291 hop is a relatively new varietal, and before Flying Dog’s bottling of this IIPA (Imperial India Pale Ale), had only been used in a few beers previously. Single Hop Series: HBC-291 is an utterly distinctive Imperial IPA released by Maryland’s Flying Dog Brewery. The HBC-291 pours with a burnished brown to slightly orange coloration. This effort fills a glass with a significant amount of head that sticks around for a few moments before dissipating. 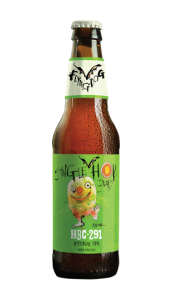 While pegged at 8.0% ABV, the Single Hop: HBC-291 hides its alcohol perfectly; any astringent or sharp sides here are contributed wholly by the hops present.

This means that the beer’s distinct elements play well together; this is a harmony of flavors rather than a cover-up of the unmistakable alcohol burn. The overall array of flavors experienced in a bottle of HBC-291 changes the further that one delves; the intense bitter notes present immediately after pouring fade slightly, allowing for maltier tastes to come into focus. Flying Dog includes Biscuit, Cara-Pils, and Rye malt here, giving the beer a toasted backbone that provides ample highlighting to the unique qualities of the HBC-291 hop. Sweeter elements blend with fruit tastes (peaches, apricots) contributed by the hop to keep imbibers interested in the final quaffs; the beer is able to keep a cogent profile from stem to stern.

We last reviewed a Flying Dog beer back in 2012 with the company’s Flying Dog Kujo Imperial Coffee Stout . For more information about the entire array of Flying Dog’s beers, visit their domain. Further news and knowledge can be gleaned through their social media profiles. Keep an eye on local store shelves as Flying Dog will make two further additions to their Single Hop line, with Ella utilized in April, the Nugget variant in July and the Azacca hop in October.