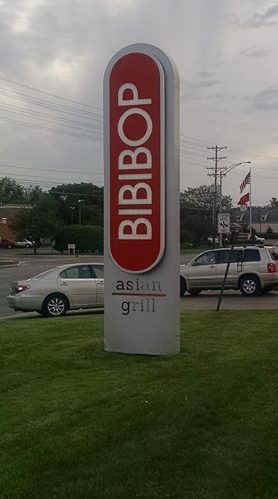 We do not nearly make it to Korean restaurants often enough, but I always make it a point to pick up a bowl of bibimbap when we do visit. A new chain – BiBiBop Asian Grill – came to our attention a few months back that seeks to make the dish (and Korean cuisine) more known to the dining public of the Columbus, Ohio area. We were invited to evaluate their Henderson (1836 W. Henderson Rd; Mon-Thu 11am-9pm  Fri-Sat 11am-10pm Sun 11am-7pm) location. While the resulting dishes are pretty different from what one will get at a traditional Korean restaurant, we were pleased at the amount of customization and overall flavor profiles of the bowls that the restaurant offers. 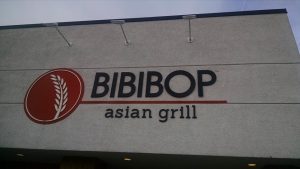 We were a little concerned about the size of the line that we encountered when we stepped into the restaurant, but a capable service staff was on point utilizing a similar assembly-line approach to other fast-casual chains. Visitors can order a bowl, salad, or a roll with a base of sauteed purple potato, black beans, and/or bean sprouts. 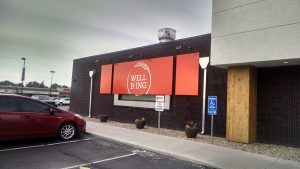 We chose the spicy chicken and steak options, while BiBiBop Asian Grill also offers chicken and tofu choices for one’s protein. Where the main dish ultimately can vary comes in the number of vegetables and toppings that BiBiBop offers; during our visit, the restaurant offered cucumbers, lettuce, shaved carrots, corn, egg, and cheese. 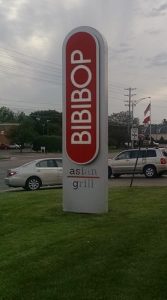 The dish concludes with a drizzle of any of BiBiBop’s sauces, ranging from the traditional teriyaki and yum yum sauce to a spicy sriracha and Korean Red sauce. One can further bolster their experience with BiBiBop’s own kimchi, miso soup, and edamame. 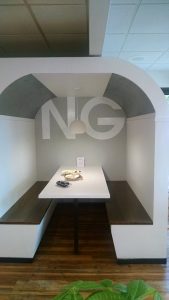 Our staffers were most impressed with the size of BiBiBop’s bowls, which dwarfed competing restaurant’s entree offerings. The amount of protein that was in this entree was up to par, while the spicy chicken had a heat level that is virtually unheard of outside of wing joints. The rice was prepared well while the potatoes seemed to be a little extraneous when compared to the rest of the bowl’s constituent elements. 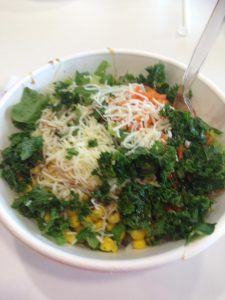 We loved the ability to self-administer sauces as BiBiBop; while the initial drizzle was a great start, we could not get enough of the teriyaki sauce. The yum yum sauce was exactly what individuals familiar with the sauce would appreciate, while I found that the spicy sriracha and Korean Red sauces would be appreciated by a wide audience. One area for improvement would be the creation of a truly mouth-burning sauce for the restaurant. Perhaps something along the line of a soy sauce/wasabi blend that could clear one’s sinuses would be a welcome inclusion to the restaurant. 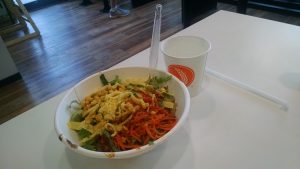 BiBiBop Asian Grill’s location and parking were spot-on, with the location that we attended offering a number of distinct post-meal options. The interior of the restaurant was inviting, well-kept, and had a good overall flow. The restaurant is a place that those looking for a healthy meal or for a good overall value can appreciate. The ability to order online and to set a pick-up time is great for those looking to pick up dinner after work.

As of this article, BiBiBop Asian Grill operates 9 restaurants in the Columbus, Ohio area.