Unchained 21: Us & Them (Summit Brewing) 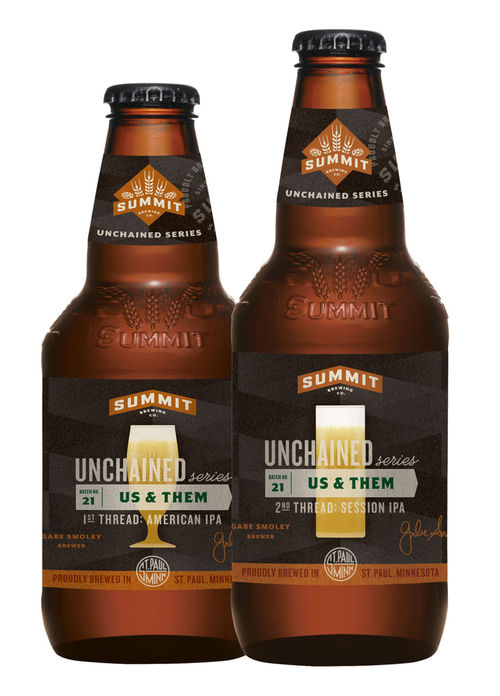 Many times, individuals are locked into a specific beer for four or six bottles. It was surprising to us that Summit Brewing offered two distinct threads of beers in their Unchained 21. This means that one is given a shot at a unique session IPA and an India Pale Ale.

The session IPA has a good blend of wheat and hop elements, showcasing a wheaty side. The 55 IBU are utilized well here, as the brew is able to stave off a great many of the sweeter elements that tend to build at lower ABVs. The second thread of Us & Them is a good replacement for the lagers and pilsners that dot store shelves,

We were most impressed by the India Pale Ale as it linked together a strong hop presence with a delightfully juicy taste. The 90 IBU of the 1st thread of Us & Them is weaved into the twists and turns of the ale perfectly, making for a strongly-hopped beer that provides imbibers with good amounts of citrus elements. The assertive hop presence ensures that the ale maintains constancy from the beginning to the end of a pour. By establishing such different flavors in the space of one six pack, Summit is able to really redefine wheat is possible. The two brews here are a yin & yang, each having strong suits in the areas that the other thread may be weak. The 1st thread would do well paired with burgers, fish, or chicken, while the 2nd thread shines when it is paired alongside dried meats, strongly-flavored cheeses, or fatty nuts.

We have reviewed other Summit efforts in the past few years; check out our coverage of Unchained #15: Make It So,  Hopvale , Hop Silo,Unchained #17 : Harvest Fresh IPA, Old Blaggard Barleywine and Unchained 15: Fest Bier.