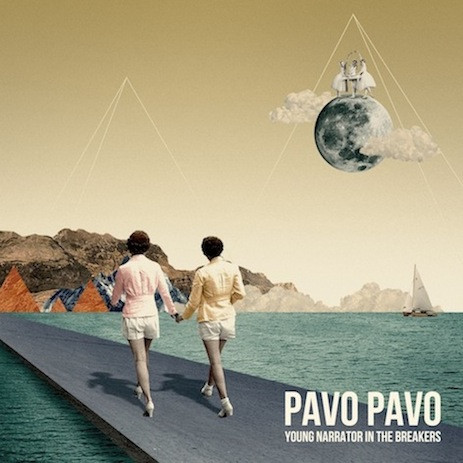 The latest effort from Pavo Pavo (slated for a November 11th release) kicks off with “Ran Ran Run,” an ethereal, mood-inducing number that recalls clearer, less-awash-in-effects sounding Cocteau Twins. The track sets the stage for a record that seems to pulsate with life and feeling, channeling the changing of the seasons as the earth practically breathes.

While the sounds of vintage instruments and effects can be heard throughout, the record paradoxically has a feel of something out of some sci-fi-oriented future world. The twiddling of knobs mixed with  contemporary rock instruments play a major part in achieving this sound and while, arguably, nothing will ever likely come close to the history-making pop bliss of Pet Sounds, one gets the idea that Pavo Pavo are indirectly working with the plans which Brian Wilson drew up.

Though the title evokes mid-1970s New York for those old enough to have known that period or are at least familiar with the film of the same name, “Annie Hall” belies its name by giving off a carefree Beatles meets Beach Boys sound. The effortless, matter-of-fact sound of the whitewashed mid-60’s abound to recall a time before true turmoil set in in America. Though the movie “Annie Hall” is set firmly in the east coast, the song lies in a bygone era in hallucinogenic, sun-soaked California. As minimalist as it is, the track has huge presence  by way of its ability to capture a certain time and place. The song is one of the standouts on the record.

While a few tracks might be seen as filler (the seemingly Flaming Lips-inspired “A Quiet Time With Spaceman Sputz.” and the wandering-to- nowhere vibe of “2020 We’ll Have Nothing Going On”), these can be forgiven. Because working within an odd pop genre which is so firmly based within specific sound textures; to get more than a few notable songs on a single record  is a commendable achievement.

Pavo Pavo has found a small piece of a blissful utopia within which to dwell, if only for the time that the record is playing. It will likely be difficult for listeners to just enjoy in passing as too much of this kind of sound can be “too much.” This isn’t to say that it it doesn’t hit the spot when one is in a certain mood. During those times, this record reveals itself to be able to do more than just a satisfactory job.