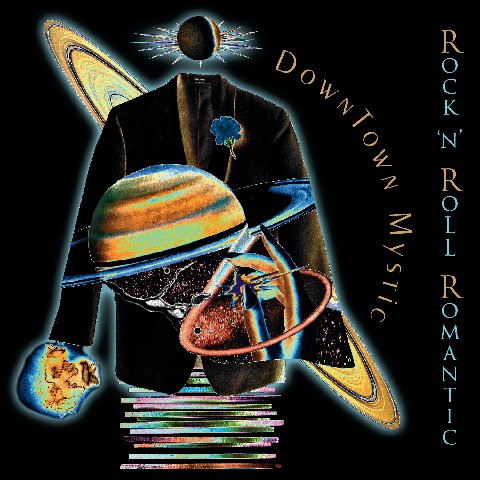 DownTown Mystic’s Rock’n’Roll Romantic was released on disc in October, tying together the musical contributions of a who’s who in rock music. E Street Band veterans including Garry W. Tallent and Max Weinberg lay down performances alongside PJ and Steve of Trixter. Before Rock’n’Roll Romantic concludes, the musician roles increase to include Ian Hunter’s Rant Band and The Discontent. DownTown Mystic creates a cogent story that is weaved through the whole of this new album. In a call back to vinyl records, DownTown Mystic’s latest is oriented into a side A / side B format. The retro yet futuristic look of the cover showcases nicely the dichotomy between cutting-edge and more classic elements.

For long time fans of DownTown Mystic, Rock’n’Roll Romantic is a must-purchase as it allows Robert the opportunity to properly stretch his musical muscles. While there has always been a desire to experiment on previous DTM releases, I feel that the different styles and approaches that are presented here provide DownTown Mystic with a new vibrancy. While this new release is a theme album, listeners will be able to enjoy singles like And You Know Why, Turn Around and Go and Eyes of the World on their own. The allure of the theme album format kicks in when fans can sit back and pay attention to each note, dynamic, and influence that hits their headphones.

While there are a number of twists and turns that listeners will experience during their time listening to Rock’n’Roll Romantic, Robert’s ability to make a cogent and coherent sound dominate is unparalleled. This means that harmonicas (laid down by Jerry Fierro on “Brian Jones”) can work alongside chugging rock guitar, taut jazz-infused drums, and trappings of blues, southern rock, and 1980s riffs. No two efforts on Rock’n’Roll Romantic hit the same notes, making this an album in which every track matters. Interested individuals can purchase their own copy of Rock’n’Roll Romantic from DownTown Mystic’s CDBaby and iTunes. Further information about the act can be found on their main domain or social media profiles.  Our review of Rock’n’Roll Romantic follows.