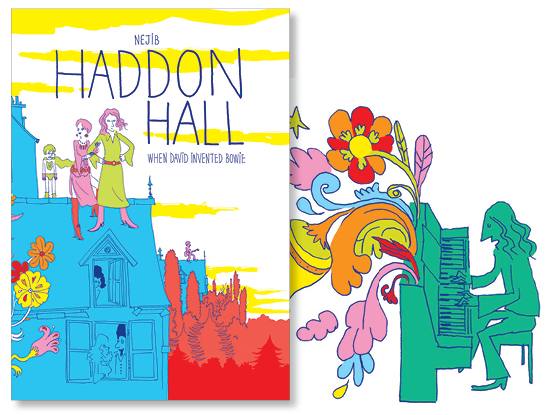 In 1969, after his single “Space Oddity,” managed to garner a decent amount of attention, David Bowie with his wife Angie moved into a massive house in London along with a slew of other hippies, that went under the name Haddon Hall. The house is the setting for the quirky yet inventively creative book by graphic designer/comic artist Nejib. The hardcover comic tells the story of Bowie putting together his band and struggling for a creative identity and the inspiration to become a rock star.

The author certainly takes some liberties with the David Bowie timeline throughout, but it takes little away from this fantastically told narrative about rock royalty. The comic style borrows heavily from graphic designers of the late ‘60s and early ‘70s giving the book an authentic look.

Alongside Bowie, his wife, Angie, and his band mates (Mick Ronson, Mick Woodmansey and Tony Visconti), there is a parallel storyline here about longtime Bowie friend and musical competition Marc Bolan.

An impressively creative and entertaining way to tell the story of one of rock’s great ones.