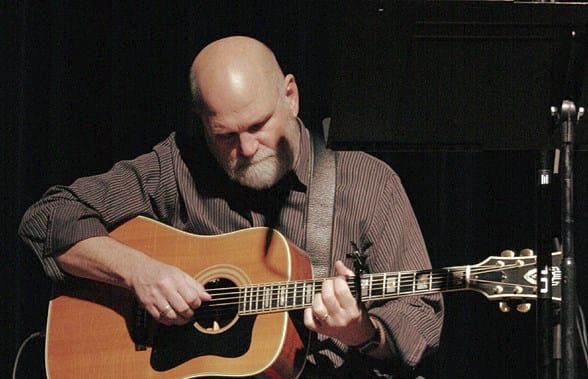 Today, we are speaking with Jim Bohn. Can you give us a little background information about yourself? How did you get into music?

Funny thing.  When I was very young (five or six), my parents bought a cheap plastic EMENEE organ for the family.  Everyone else goofed off with it and eventually got bored.  One day, after a Catholic mass (I was required to attend as a first grader), I sat down and played a Latin hymn I had heard.  It simply made sense to me.  I have only had one or two lessons in my childhood.  I am self-taught.  I simply know what to do and then I practice.  Since then I’ve taught myself guitar, piano, five string banjo and other instruments.

You have just released a new album, Bound for Judah in 2016. What was the writing/creative and recording process for the song like?  What is the significance of the album’s title?

My grandson is named Judah.  Love him to pieces.  He lives about 300 miles away, and one day I said I was Judah bound … one of my friends wrote on FB “Bound for Judah” and there it was!  The rest of the album is built around the old testament idea of Judah as a future place of glory.

In a similar vein, the titles of your songs on Bound For Judah seem very descriptive. Are you referring to specific points of your life or creating a story for the release?

The whole album is about persisting in life, being bound for something  — going somewhere in the future — in a vein of hope like the old gospel singers in the south sang about.

You’ve had a long and storied career, but in a different field. How has your time providing organizational insight impacted what you’ve put to CD on Bound for Judah?

Oh, that’s simple!  Funding!  These projects aren’t cheap!  I will say that working with thousands of people through several decades has given me a sense that people who persist are people who win.  And those that persist generally have a long view of their lives – don’t give up easily and keep persisting in their goals.

I leave the recording to the engineering experts!

I love all kinds of music, have since I was a kid and I am influenced by powerful melody and harmony, irrespective of the genre.  If I had to pick a group, I’d say the Moody Blues, because of their broad capability with rock and symphony, an amazing combination that influenced me greatly.

The strange thing about a great line-up is that it would be so intimidating, I think I’d rather listen than play.  The world’s greatest players and singers are hard to match in finesse.  A man needs to know his limits.

What should listeners expect from you in the future? What does the rest of 2017 hold for you?  I’m pondering a rock opera right now.  Had the idea for some time and now that Judah is done, I’m going to give it a go. Music is truly a universal language because it transcends knowledge and reaches into the soul.