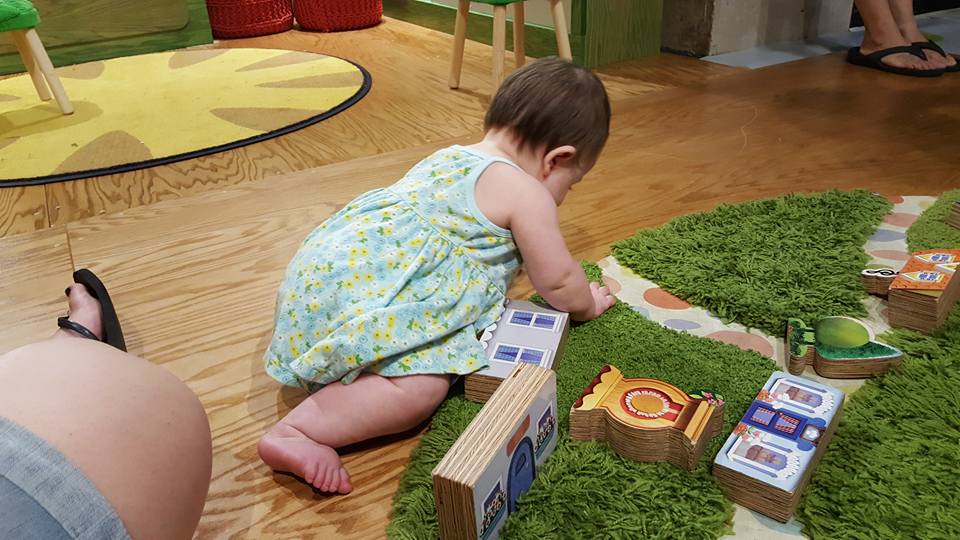 We had our first long, multi-day trips out with our daughter in late August and had a tremendous time while doing so. The Oglebay Resort catered to her every whim while we went to Primanti Brothers down on the Strip. Before we left the area we stopped by the Children’s Museum of Pittsburgh; the museum is located close to PNC Park and is an easy destination to get to if you are lodging anywhere near the Pittsburgh downtown area.

The parking for the Children’s Museum was simple to get into and was only $6 which is a steal for downtown and city parking. We were quite happy at the ability to pay this parking toll by means of a mobile application. We brought our daughter into the museum and immediately had to stop for a change. Going downstairs and seeing the timeless / early 20th century architecture of the Museum was nearly an attraction by itself. One gets an idea of the role that the building has occupied over the course of the last hundred years. While our daughter was a slight bit young for some of the exhibits that we saw while at the Children’s Museum, there were a number of installations and art pieces that caught her eye. Different sections including mirrors and light were tremendously interesting to her but the other attractions really felt as if we could come back in here in a year or so, allowing her to picked up nice on their nuance.

For example the one mirror that is present utilizes a number of motors to create a rudimentary depiction of whatever is in front of it. Crawling space is a human or at least kids sized version of a cat’s crawling apparatus, something that will keep a child’s imagination for a good half hour or so.

As parents we were quite interested in the original puppets that were utilized on the Mr. Rogers show, which were given their own installation further up in the museum. The water and ice floor was nice but our daughter was a mite too young to properly enjoy all the hands-on activities. We also were unaware that the hands-on aspect of this floor made a swimming suit nearly required for proper enjoyment. Finally we stopped in at the art wing and had some good time playing with clay. While the section closse a little bit earlier than the rest of the museum one can see the sheer amount of projects that are offered on a regular basis. For those that get hungry before the end of their time at the Children’s Museum, there is also a cafeteria that has a wide variety of different dishes.