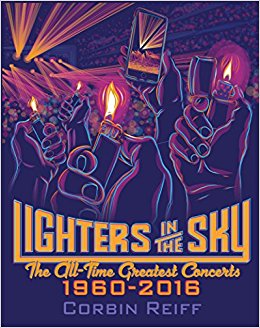 Corbin Reiff must have known what he was setting himself up for when he decided to tackle a list of the best concerts, year by year. No matter how spot on his picks are – and with a couple of nitpicks here and there they are – there are bound to be people who have a problem with his selections. The only thing music nerds like more than talking about music is arguing about music.

As described in the introduction to Lighters in the Sky, Reiff, a music journalist, explains “Each year there’s usually one, maybe two, live musical performances that transcend all others. It’s a unique event that forces you to say, ‘How cool would it have been to have been there?’” So, starting in 1960, with Muddy Waters at the Newport Jazz Festival, up through 2016’s Desert Trip 2016, a show with aging legends Paul McCartney, The Who, Neil Young, Roger Waters, The Stones and Dylan, Reiff ranks the best shows of each year with an exhaustive write up laying out his decision.

He includes some of the obvious and not so obvious here, as either the year’s best or Honorable Mention across a slew of different genres, from punk to rock to blues to dance pop. The write ups are all well-researched, well-argued and include set lists as well as backing musicians and guests, when applicable.  For the older show, he has the benefit of time showing just how memorable and in some cases influential these concerts were (In particular, the 1976 Sex Pistols show in Manchester, which led to audience members starting The Smiths, Joy Division, The Fall and The Buzzcocks, as the urban legend goes, is given Honorable Mention). Like every other music geek out there, there are one or two selections I would nitpick from this book, including the past-their prime line up at “Oldchella” Reiff ends the book on; or the selection of Drake as 2015 best concert (there’s a very good chance he could end up being this decade’s version of Bubba Sparxxx, with the passage of time).

But, room for debate is part of the appeal of this book. Reiff’s style is not heavy handed and ultra-authoritative, but rather a music lover reflecting on the brilliance of live music. A great read for any music fan.