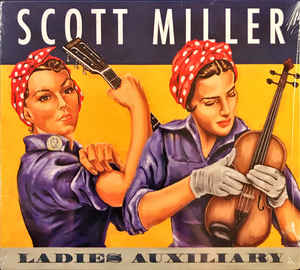 Since leaving the V-Boys in the late ‘90s, Scott Miller has forged a career as a solo artist, making waves in the alt country scene, but managing to fly under the radar of most outside the genre. It’s a shame though, as his 10th effort, “Ladies Auxiliary” shows, Miller is a fantastic songwriter.

Miller has always had a knack for allowing humor and beauty to coexist and this latest is no exception. A song like the wickedly sly “Jacki With an Eye,” about a guy on the prowl at the State Fair, segues perfectly into “Someday/Sometime,” an achingly tender song (quite possible Miller’s best). And just one track later, Miller snaps right back into the snark with “Mother-in-Law,” (“Well, she smells like a biker and she cackles like a jackal/dressed to kill in that new pantsuit you can see the static crackle”). Elsewhere, he sings so eloquently about the plight of the blue collar in “Lo Siento,” that he could have made Guy Clarke envious.

Miller may not be a household name outside of Americana circles, but that’s certainly not due to lack of talent.