Liz Kennedy – Hike Up Your Socks 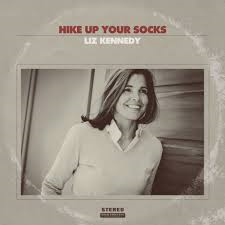 Liz Kennedy scores big with her latest studio release Hike Up Your Socks and enlists some major league firepower to pull it off. Taj Mahal guests on significant album cuts and adds another weapon in Kennedy’s sonic arsenal. It helps, however, that Kennedy has written her best collection of songs yet for this recording and, based on exuded confidence alone, comes off as a musical artist who entered the studio locked onto what they wanted the final product to reflect. Hike Up Your Socks is one of those albums that can’t just be deemed one thing and then you’re done. The songs, instead, cover an expansive array of textures, tempos, and musical moods without ever losing a central unifying theme. The dozen songs on this album certainly share a lot of common ground, but there’s an across the board and consistently available sound carried over from one song to the next.

“Everyone Knows How It Goes” featuring the legendary bluesman Taj Mahal is a wonderfully vibrant performance that is a reflection of the joy in sharing musical moments. “Attention” puts off a very different approach. This is more melodic with glittering textures and not nearly so overly reliant on blues. Songs like “Say The Words” come from the same deeply personal place in her heart, but they emerge in different vehicles than some of the more niche or retro sounding arrangements. “Love Gave Me Away” is probably the album’s best moment in that vein. Kennedy manages to bring together a very traditional musical attack but thanks to great production values, a wholehearted vocal, and knowing just how to thread the different musical strands together, the performance comes off without a hitch and will win countless converts to Kennedy’s talent. “Hello Romance” is a buoyant number spilling out with wide-eyed optimism, belief in a better tomorrow, and Kennedy plays it straight, never smirking, chronicling a feeling and moment all too rarely written about in pop music.

While the tempo may be a relatively basic shuffle, the layered musical attack that Kennedy and her cohorts bring to bear on the title song is remarkable for how uniformly laid back and confident the performances comes off and the airy layering of instruments. It is certainly one of the better written tracks on an album full of great material. She tries on a largely acoustic stance with the track “The Signs” and it signals a heavy shift in the album’s mood that reminds us, if we’ve forgotten, of Kennedy’s artistic aspirations. This is a singer and songwriter clearly interested in more than entertaining listeners. The light R&B edge, courtesy of brass, that we hear on a song like “High Time” works as another vocalist when it comes to Kennedy’s material. She doesn’t write individual parts – these are songs presented as compositions and succeed on those merits alone. Hike Up Your Socks is a resolute statement of purpose from an experienced performer now more than a few years removed from their debut. Well worth seeking out.