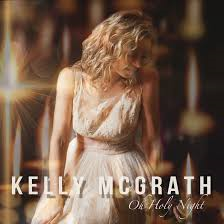 Kelly McGrath has enjoyed considerable and gathering commercial success in the last two years propelled by her acumen for writing and delivering songs possessing across the board appeal and genuine musical, as well as emotional weight. Her latest single “O Holy Night” expands on those qualities with a particularly affecting performance, both vocally and musically, that pushes far beyond the broad-stroked cheer and clichés typical to Yuletide themed releases. Instead, she makes her own magic from this venerable tune and surrounds herself with a musical backing blooming with its own artistry, yet elegantly supportive of her vocal efforts. “O Holy Night” isn’t the usual Christmas song, in the sense that we don’t hear it as often as we do others, but she makes it come alive with a level of taste and discernment few of her contemporaries and peers can or dare to ever muster.

Her vocal will stay with you long after you finish listening to the song. No matter how objectively lovely some Christmas time performances are, most are confined to the season and lose their relevance when divorced from the holiday. People hit the play button for a few weeks in December then shelve the tune again for a year if they listen to it again at all. That isn’t the case with McGrath’s “O Holy Night”. Her singing and the accompanying musical arrangement make this a song that bears revisiting no matter what the calendar says and it speaks to humanity within us that knows no season. Despite the song’s religious connotations, McGrath’s approach is more art than artifice and her careful singing gives “O Holy Night” a cinematic quality it likely would have lacked in less competent hands without putting over some sort of message for the audience. It’s a welcome aspect to a performance that never risks being too heavy handed or overwrought.

Despite the presence of guitar, it has an almost classical air. The stately progress of the tune remains consistent throughout and neither McGrath nor the musicians ever rush their respective performances. Instead, “O Holy Night” is orchestrated from the outset, each new guitar lines building on the preceding one, and the arrangement rising as a whole with the song’s peaks but never pushing so hard that it threatens to overwhelm the audience or singing. Everything is in its place here and measured for maximum effect. It results in a fully unified musical and vocal performance that honors the long history of this song while still carving out a niche for McGrath to say she owns a piece of this song forevermore. Kelly McGrath’s “O Holy Night” is a mesmerizing effort from a world class talent and far from your standard seasonal fare. Moreover, it proves that McGrath is far from a one or two trick pony and possesses a range capable of handling a vast array of material.