CK and the Rising Tide – Friends 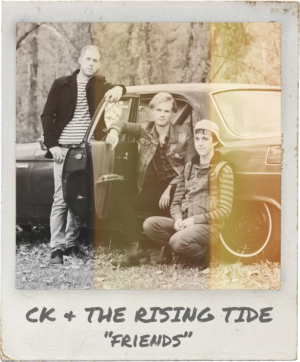 The debut single from C.K. and the Rising Tide, “Friends”, comes from an uniquely magical configuration of musicians. Brother C.K. and Wayne Flach have played together before in an earlier band named The Kindness and C.K. released his first solo recording Empty Mansions following the band’s disbandment. The well-received album promised to be the first of many for C.K. Flach and he definitely demonstrated the needed songwriting skills to sustain that sort of career but, instead, Flach set up a drum kit and began jamming Empty Mansions’ material with bass player Chris Brant and violinist/keyboardist Danny Boudreau in 2017. The trio soon invited C.K.’s brother Wayne to join them on guitar and the band began working on new material and reworking existing material from the brothers’ past. “Friends” is a fantastic single for introducing the band’s sound to audiences and they promise to bring the alt-country and indie scene a fresh new voice in 2018.

The song has great production and mixing qualities that help it come alive. The blending of its instruments doesn’t have a single discordant note during the song’s four and a half minute duration  C.K. and the Rising Tide adopt a very traditional tempo for this sort of style, but they make the performance their own by bringing their own distinct personalities to bear on every aspect of the song. It begins, naturally, with the musical arrangement underpinning their lyrical inventiveness. C.K. Flach’s drumming is a musical centerpiece of the song and he has a totally sympathetic musical partner with bassist Chris Brant. Wayne Flach’s guitar playing is, truly, ideal for the unit because he’s a player with immense skill who, nevertheless, checks his six string ego at the beginning of the tune and offers only what the song needs to reach its potential. Danny Boudreau’s forceful violin playing is intensely musical and brings another vibrant strand to their songwriting tapestry.

C.K. Flach’s singing is ideal for the song’s musical landscape and he knows exactly how to inhabit his surroundings. His voice is far from classically beautiful, but his understanding of phrasing and when to bring emotion more to bear are highly individual touches that neatly dovetail into his command of fundamentals to make for a potent musical stew. He has fantastic lyrics to work with, as well, and the writing mimics the musical arrangement in the way that C.K. Flach pares every line down to its essence and there isn’t an extraneous word to be found in the song. What an auspicious beginning for C.K. and The Rising Tide. “Friends” is the perfect lead off single for their first album and introduces the world to a band whose sound is unified at a rare level we rarely hear anymore; C.K. Flach and his band mates will garner a quick following and their admiration is richly deserved on the basis of this song alone.