At the Gates – To Drink From The Night Itself (single) 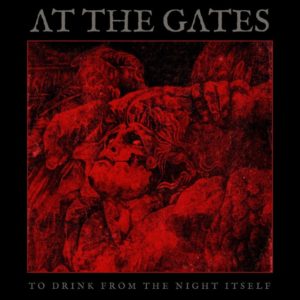 At the Gates requires no introduction, not from someone the likes of me at the very least. Hailed among the forefathers of the Gothenburg melodic death metal scene, these Swedes have been iconic in shaping a genre and spawned a legion of like-minded bands in their decades-long career.

They are back with their newest single To Drink From The Night Itself from their upcoming record of the same name, and I would not have blinked if someone told me that this was a B-side off 2005’s magnum opus Slaughter of The Soul.  All the genre staples can be found here, fast-paced string skipping riffs, raspy vocals, thundering bass, and heavy drums. The intro riff waxes so nostalgic that it forced me to dust off Slaughter and listen to it in full.

Following their last full-length At War With Reality which was a strong effort and a great comeback, I was deeply hopeful they wouldn’t fade into a hiatus again, and was disheartened at the news that guitarist and founding member Anders Bjorler had left the band, but new addition Jonas Stalhammar is a worthy fit, and he has definitely done his melodeath homework.

To Drink From The Night Itself out on May 18th on Century Media Records.