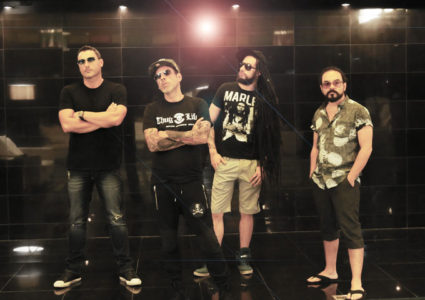 Monsieur Jobs’ “Chow Chow eyyy Pow Pow” is an attention grabbing debut single featuring a cadre of top flight musical and songwriting talent. No Mercy’s long-standing vocalist Martin Citron gives this immediate commercial appeal it might have otherwise lacked, but the combination of Toby Holguin, Leo Jaramillo, Stan Kolev, and Charlie Illera deliver the goods from a musical point of view and their contributions are informed by a deep grounding in live and pre-recorded or digital sound. This broad-based appeal this generates is key to making this one of the most appealing pop songs to be released this year and it maintains an internal logic from the first that any listener can latch onto. There’s a surprising amount of melody linking up with the compelling drumming and the union of those organic elements with the song’s rhythmic base makes this a durable and enjoyable experience from the first notes onward.

The drumming is a listener’s first cue. The radio edit is punctuated by a compelling percussion attack that acts, practically, as the song’s lead musical instrument, yet it never mars our experience of the song. Instead, the Latin bounce in the drumming creates a steamy groove for the song and gives added instruments an emphatic counterpoint. There’s a smattering of guitar coming through the song’s mix and it has a nicely funky edge that gives the song some of the urban punch mentioned in the release’s accompanying press materials. The mix of these potentially disparate styles comes off without a hitch and casual listeners will find themselves slightly hypnotized by the song’s slinky groove. It’s impossible to get tired of this track musically and you’ll be left wanting more by the time it reaches an end three and a half minutes in.

The vocal is equally satisfying. Cintron’s singing amply shows the years of experience he’s logged fronting the popular act No Mercy and he adepts to the musical demands of this piece with every bit of the confidence and excellence you expect. The quality of his voice is undeniable, but the real highlight of his performance comes from such evocative phrasing that it conveys worlds of meaning to any listener, overcoming any language barrier. There’s definitely a conscious effort to craft a track flush with the band’s command of Latin sounds, but it never sounds forced. Instead, the sound comes off as natural as breathing. “Chow Chow eyyy Pow Pow” is contagious fun from the first, capable of entertaining even the most jaded of listeners, and proves to be as fine as a first single as Monsieur Job could have hoped to release. It bodes well for the project’s future and marks them as an immediate major player in this style. Basswalk Latino has a gem on their roster with this quartet and we can only hope that they’ll continue working with Martin Citron on future releases. Even in his possible absence, we can come back assured that the band’s core four members are talented enough to make a mark for years to come.