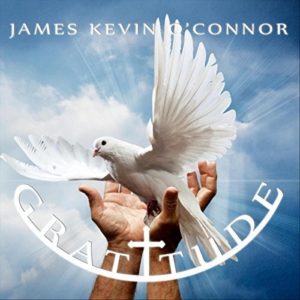 James Kevin O’Connor’s titular opening to Gratitude is an inspirational, narrative-heavy effort that rises and falls well. Hints of Bruce Springsteen, Bob Dylan, and Steven Curtis Chapman can all be discerned in this first effort, but there is a unique style that is purely O’Connor’s on his release.

More Than A Reason is another hit for O’Connor. The sizzling guitar work, dense bass lines, and hints of a synth unite to make for an effort that will stick with listeners long after this cut (and the entirety of Gratitude) concludes.

51 Shades of Grey builds upon the radio rock of the 1980s with a bit of Dire Straits and Mr. Mister that can be sussed out. It is during this track where O’Connor’s voice shines the brightest. The high energy will have listeners’ toes tapping while the instrumentation is thick enough that fans will be able to listen multiple times before hearing everything that has been placed within.

Here to Share and Care is another high-water mark for O’Connor in that a secondary set of vocals is included, which adds an entirely new dimension to the second half of the album.

Like I’m Home continues with the dichotomy of male and female voices, adding a killer guitar line into the mix. As a result, the track is hitting on all cylinders; fans will be on the edges of their seats until the final few notes play out through one’s speakers. Tango On is the penultimate track on Gratitude and it showcases a bit of Spanish and south of the border influence.  Eagle-eared fans will be able to pick up hints of Warren Zevon in James’ vocals here, a nice call-back to Warren’s Carmelita.

Gratitude concludes with Speak to Me, a track that is both vital to understand what O’Connor has done on the album as well as the potential avenues which he may take listeners on follow-up recordings. For additional information about the performer, take a look at his domain. Samples of music from Gratitude can be found on his ReverbNation profile.

Top Tracks: More Than A Reason, 51 Shades of Grey, Here to Share and Care