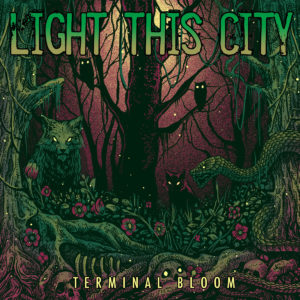 At the Gates did a lot for metal music, giving a melodic edge to the oft-brash death metal genre, birthing melodic death metal, a genre now as established as any other, and Light This City are back after a decade long hiatus to rekindle our love for the band and genre with their newest record Terminal Bloom.

The ten years spent away from the scene has done nothing to temper the fury that is Light This City’s take on thrashy melodic death metal, with all of it’s Gothenburg infused riffing, raspy vocals, melodic lead runs, and blast beats. Terminal Bloom could have been in 2010 at the height of the melodic death/metalcore craze and sit up there with the biggest and baddest sluggers out there!

As solid and dependable as Terminal Bloom is, Light This City has tried its best to show us that they haven’t been sleeping on the job and still have a few tricks up their sleeves. The more restrained drum work by Ben Murray adopting a more thrashy approach makes the few runs of blast-beats even more enjoyable as heard on Extinguished and the intro of Neverlanding. Guitarists Ryan Hansen and Steve Hoffman fill up the space with every known trick in the book, minor-scale string skipped riffs (a la At the Gates), tremolo picked runs, and soaring melodic riffs. Where Terminal Bloom again shines, is in its mature use of restraint and focus on songwriting. Gone are the days, when the fastest, craziest guitar arrangements won the race.

Vocalist Laura Nichol is just as pissed off as I remember from their previous release Stormchaser, and her screams haven’t changed in a decade, which by itself is an achievement. Her vocals are strong, gritty, and phrased perfectly to suit the overall vibe of the record. The overall production on the album is pristine, which comes as no surprise coming from the able hands of Zach Ohren. The result is that Terminal Bloom is as pleasurable as it is heavy, which is a rarity in the current scene where many albums tire the listener.

Even with fresh sections like the acoustic album introduction, the chorus of Wild Heart and thoroughly headbang-worthy The Wake of My Will, the downside to Terminal Bloom, is that Light This City played it too safe with Terminal Bloom. It is safe to assume that after a decade long wait, they probably decided to stick to their old dependable guns rather than make a marked shift in genres, as many other bands tend to do while releasing material after a long break.

Hopefully, the world tells Light This City after a solid and dependable, yet enjoyable release like Terminal Bloom, that it is safe for them grow again.