Mike Ness – Cheating At Solitaire; Under The Influences (Vinyl) 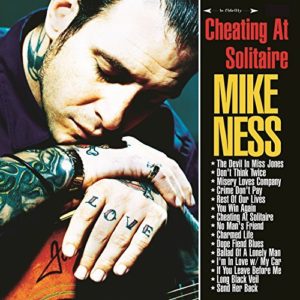 It’s been just shy of 20 years since Social Distortion front man Mike Ness released his two (and only, so far) solo efforts, but they are finally getting a proper vinyl re-release.

Though there had always been winks and nods to Outlaw Country in Social Distortion’s music for years (“Ball and Chain” is pretty much a country song with power chords and a distortion pedal),

Cheating At Solitaire was his first real foray into the country/punk genre. The album served as a template for a slew of musicians that would follow proudly touting their Willie and Waylon influences as loudly as they praised The Clash and Sex Pistols. The record also boasts some pretty impressive guests like Bruce Springsteen, Brian Setzer, X’s Billy Zoom, Josh Freeze and members of Royal Crown Revue. He doesn’t completely turn his back on punk with this album but compliments it with plenty of country and rockabilly tunes; and it’s those songs where Ness’ hard to miss whiskey and gravel vocals pair perfectly. His take on Dylan’s “Don’t Think Twice” is quite possibly the best cover of that oft-covered song and the title tracks is a flawless tear in my beer singalong. He also does a great cover of Springsteen’s “Misery Loves Company,” with The Boss sitting in. There’s also a Hank Williams tune, a great one from Al Ferrier and “Long Black Veil” (most associated with Johnny Cash), but the bulk of the songs here are Ness originals.

Under the Influence came out the same year but was not nearly as impactful as it’s predecessor. While still a good record, it’s almost exclusively old country and rockabilly covers, save for a very cool honky tonk version of “Ball and Chain”. The inclusion of Sonny Curtis’ “I Fought the Law,” seems a little redundant after The Clash’s brilliant cover. Elsewhere, Ness does justice to Hank Williams’ “Six More Miles” and Marty Robbins’ “Big Iron”.

These vinyl re-releases have been a long time coming but prove to be well worth the wait – Cheating at Solitaire even comes with a bonus track “Company C”. Though these songs have been around for almost two decades now, these albums are perfectly suited for the vinyl format, pristine sound played in the right sequence with no skipping or moving around.

Mike Ness – Cheating At Solitaire; Under The Influences/Vinyl LPs/Craft Recordings/2018