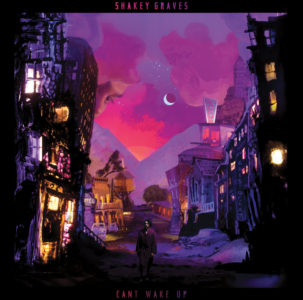 Shakey Graves (Alejandro Rose-Garcia) had only been in the public eye for about a year in 2012 when the mayor of Austin proclaimed February 9th, “Shakey Graves Day.” A hell of an achievement so soon out of the gate, but six years and several albums later, Garcia is still living up to the hype.

On Can’t Wake Up, his sixth album, he and his band still keeps a base of Americana, Blues and Rock in most of the songs here, but this album is easily his most experimental one, with psychedelic tinges and atmospheric elements added throughout. The change is very noticeable early on, with the song “Dining Alone,” which sounds like a haunting cowboy campfire singalong, being performed with aliens thanks to eerie slide guitar sounds. And then elsewhere he goes for more of a straight-ahead rick vibe on “Cops And Robbers.”

Though the album’s experimental sound may take a couple of listens to finally take, it’s well worth the time. Can’t Wake Up is a refreshing departure at a time when there are plenty of Shakey Graves clones out there trying to cop his old sound.