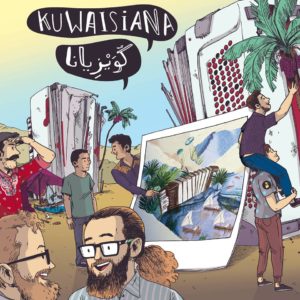 Kuwaisiana’s, Chapter 1, is an awesomely interesting release by an equally intriguing band from New Orleans with bridges to Kuwait who combine the vernacular of topics between there and the US southern region. They cross bread everything from Cajun to Pop music in their combination of styles that never leave out the two areas in which they’re grounded, yet they have a universal appeal in the process. Chapter 1 wins on that premise alone, and the way the do it all must be heard by the masses. This is a bi-lingual album release, with Arabic making up the first half and English the second half.

These musicians are world class and second to none at what they do to combine old and new world themes that sound as good at any cookout or outdoor festival as they do at any inside venue, or on the headphones and the hi-fi. “Vintage (ڤِنْتِج)” is the opener and it establishes just about everything great about this band. The lyrics are Arabic, as are the following several tracks, but for any non-Arabic listeners the music does the rest of the business, and it’s enormously satisfying to say the least.

Being less focused on identity politics and controversy, the band stay true to their experiences in both the regions involved, whilst letting the music do the talking the rest of the way. “Murra (مُرّة)” takes you down a different path with a slightly more cerebral sound, backed by a healthy amount of percussive value. The track eases gently into the next on “Gashxi (گشِّي)” which seems to take on a whole other level of seriousness with what are clear Arabis statements made in the lyrics, with vocals that passionately express what Kuwaiti singer-songwriter Aziz is getting across. It starts off subtle and builds into a much called for angst that commands your attention as you hear the bands name.

After such a great track with a mesmerizing use of horns, the next track “Gabba Barra (گبَّة بَرَّة)” turns on even more of the charming horns and pulls no less punches than anything heard thus far on the album. It verges on jazz more than the other songs regardless of the amount of horns involved. I rate this one of the more interesting tracks among a chock-full album’s worth of the same.  “Nada (نَدى)” is the last Arabic language track, and it take the first half out with a lot of heart and soul before moving onto the English, which comes on just as surprisingly strong as the Arabic set, even if a little less intense.

The English songs start with “Virgin” and “Men In Power” which gives listeners a chance to see it’s really only a language barrier that makes a difference in the songs, just like color can do in the real world and this album is a great platform for it. They bring all kinds of people together with their music and the tracks get a little funkier as they go. They’re a little more playful on the English tunes, but it takes nothing away from the first half of the album which loses no steam as it goes out with the outstanding “The Journalist” and sublime “Say Yea.”