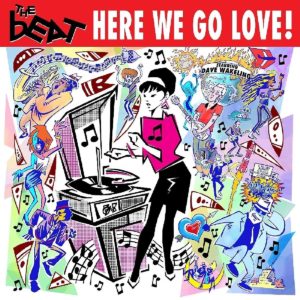 It’s been more than 35 years since the Dave Wakeling-fronted group, The English Beat (known outside of Canada and the U.S. as simply The Beat) last put out a record of new music. Maybe it’s the fact that the band has been touring fairly frequently for the better part of the last decade – and still putting on an amazing show, by the way – but it’s hard to believe it’s been this long since Wakeling and his crew last put out an LP.

But they finally have and the result, Here We Go Love, sounds, thankfully very much like the original band’s material. It fits perfectly into the collection alongside I Just Can’t Stop It, Wha’ppen? and Special Beat Service. The 13 tracks here are the same satisfying blend of Two-Tone – a mix of ska and punk – that the English Beat (who added a bit more pop to their version) helped pioneer in the early ‘80s alongside peers like the Specials and Madness.

The songs, crammed with hooks, are undeniably infectious, so it’s hard pay attention to the lyrics in the first few go-arounds, but they are some of Wakeling’s best, whether he’s talking about relationships or politics (“The One and Only,” a modern day cautionary tale, is probably one of the best songs Wakeling has ever written). There are a number of guests on the record including Roddy ‘Radiation’ Byers of The Specials and curiously, Train guitarist Luis Maldonado.

Confusingly, Wakeling’s former co-founder and co-vocalist in The Beat, Ranking Roger, currently fronts a different band that goes by the name The Beat featuring Roger. And he recently put out a new record as well. Confused? I am as well, but regardless, pick up a copy of English Beat’s Here We Go Love.