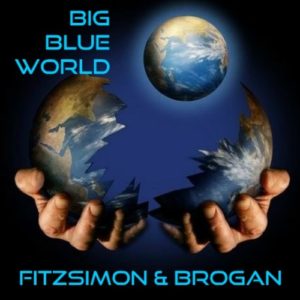 In a dazzling explosion of colorful tones and mammoth, glowing melodies that seem to melt through the stereo speakers like some sort of magical elixir, Fitzsimon and Brogan’s new album Big Blue World is making some gigantic waves even before it hits stores this June, and it shouldn’t come as a shock to anyone who has been following the European indie underground lately. There’s been a lot of energy gathering in the new surrealist’s movement of 2018/2019, but never has it been as obvious that music will play an integral part of the revolution until now. Big Blue World, along with a couple of other albums that came out earlier in the year that at this point go without mentioning, isn’t just a hot new record; it’s a book in the gospel of a style that some of my fellow music journalists and I have been affectionately calling “post-pop” in reference to the indie pop music being produced by modern artists who have little to no interest in reinterpreting rhythm and blues yet another time. They’re far too busy expanding and evolving the depth and capabilities of the sound board and all of the new, digitalized resources that are practically endless in volume and plentifully available and at their disposal. This is pop music for the future, and if you don’t understand it, you might not be ready to experience just how wild and categorically transcendent it really is.

I like to consider myself someone with a fairly broad palate when it comes to exploring new music. I think most of us tend to see ourselves this way, because no one wants to be the kind of closeminded music fan that stays hung up on a single genre or artist for so long that they end up missing every cool new development that the world has to offer. But lately, even the most optimistic among us has got to admit – there hasn’t been a whole lot of variety on the pop charts for us to select from. A lot of redundant hip-hop that’s recycling beats and samples from the last five, ten, twenty years, and none of them are any more or less original than the ones that came before them; then we’ve got a lot of crossover artists, whether they be country/pop crossovers or R&B/rock crossovers, or whatever two stereotypically predictable sound samples mashed together in a “new” way that big label A&R departments work very hard at convincing us is relevant. But there hasn’t been any solid pop, pop that is looking forward for every second instead of constantly looking backwards for easy shortcuts and lucrative songwriting formulas. Until now. I think I’ve finally found what I’ve been so thirsty for as a pop music fan in the last few years, and if the rest of the jaded audience gets this new record, I think they might start to have a little hope again too. This are desperate times, and in the strife and struggle, it’s remarkably refreshing to hear a band like Fitzsimon and Brogan coming around to pick up the slack.