Esteban Alvarez is back!! 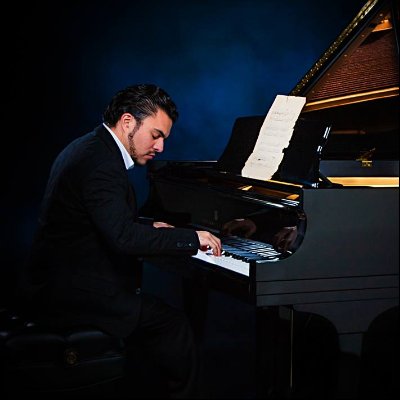 Costa Rican-born pianist and composer Esteban Alvarez is back and better than ever in his new album Piano Meets Mariachi and its accompanying single “La Bikina,” both arriving just in time for the summer record season (and making quite a splash in doing so). Unsatisfied with turning out a predictable album that would merely placate the needs of his longtime fans and the critics alike, Alvarez pulls out all of the stops on Piano Meets Mariachi, and the resulting product is a record that can hold its own amongst the legends and classics that preceded it, and all together sets an awfully high bar for those who wish to follow his act. Don’t be mistaken, this is indeed the classical album that you’ve been waiting for in 2018 (and unfortunately, the bulk of 2017 too), and it is more agile than we could have possibly hoped for.

Esteban Alvarez actually has quite a bit of professional education and training in jazz and classical music theories. Schooled at Baylor, the University of North Texas and a having studied directly under Chris Potter and Dave Brubeck, Alvarez is as much committed to being a student of this craft as he is to contributing his own unique piece to it. His blue collar ethic as an artist is also making for some super-perfected audio quality in the finished mix of Piano Meets Mariachi, and it’s a welcomed evolution for a genre that many critics have complained has had a difficult time getting itself out of the past and into the 21st century. “La Bikina” is a sprawling, ambitious classical piece, but it’s not inaccessibly fancy, which is an overwhelmingly big turn off for listeners and fans not accustomed to the calculated compositional foundation of this kind of music. It plays well and with a great flow to it, and actually manages to capture the overall feel of the album really well, which is exactly what you want in a single regardless of genre.

The ensemble nature of “La Bikina” and really all of Piano Meets Mariachi magnifies the artistry of Esteban Alvarez to an entirely different level, and rightfully so. His music has never not been larger than life, and it’s about time that he recorded an album that embodied that spirit both by design and in delivery. While I solidly endorse this record as my favorite instrumental full length of 2018 (so far at least), one thing that I might have done a little differently would have been to add a couple of more parts for the wind section of the band. A few more horns could have really added an additional layer of color that might have been too much for a lot of audiences to digest in one piece, but I think that the core of Alvarez’s most diehard fans would be able to appreciate the nod to the roots of the genre. In any case, this is nonetheless an album to be celebrated, and by year’s end, could very well be the finest overall collection of songs from an artist released in 2018.