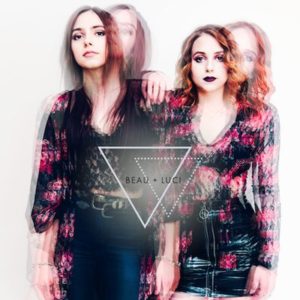 Featuring the talents of The Howling Tongues in tow, Beau + Luci’s new release Live from Aggie Theatre is a powerful audio document testifying to the strong literary qualities, spirit, and bluesy atmospherics at the tandem’s disposal. Their highly individual brand of Americana/roots music has enchanted national audiences, but their performance from Aggie Theatre brings the duo and their musical style “back home”, so to speak, and plays well for an appreciative Southern crowd. The six song collection blends folk, blues, rock, and deep soul as a unique mix on the modern music scene and the visceral power of this release suggests Beau + Luci’s artistic vision for their music is fully realized and, tantalizingly, hasn’t peaked yet. Live from Aggie Theatre presents Beau + Luci’s talents in the best possible light and, despite its relatively brief duration, packs all the weight and gravitas you’d expect from a full length offering of any type.

The swagger and firepower in “Rattle the Bones” makes this an obvious choice for the opening song. Its mid-tempo stomp builds from a fat drum track and the bluesy riffing and slashing fills from the electric guitar are punctuated by brief flashes of tasty lead guitar. Beau + Luci’s voices occupy a near ideal spot in the mix and their vocal harmonies create a great contrast with the performance from The Howling Tongues. There’s clearly a keen understanding of how spot on dynamics can influence a song, as well – “Rattle the Bones” has note perfect construction and keeps you engaged until the end. Beau + Luci’s penchant for memorable dynamics continues with “Deeper Well” and the increased emphasis on a theatrical experience . If anything, “Deeper Well” is much more reminiscent, particularly in its vocal arrangement, of traditional music than anything we heard in the opener.

“Muddy Water” begins with an extended cymbal flourish and meandering guitar chords before solidifying into a recognizable line of attack. The cut recalls the blues rock bluster of “Rattle the Bones” while sporting an airier arrangement and a different vocal approach. Beau + Luci exchange lines at key points during this song rather than relying on their harmonies and shifting stylistic gears and is a shrewd move. The deliberate tempo kicking off “Black Boots” has a more soulful tenor than the earlier material, but there’s a discernible rock edge slicing through the arrangement and mix giving it a slightly ominous slant. “Like a Drum” continues in the same mood with some clever lyrical content and, despite their upper register talents, both Beau + Luci nail some beautifully bluesy phrasing for their vocals.

The rolling percussion and reverb-laden guitar work of the finale “50 Feet” through its verses is immediately evocative and pairs up nicely with the more straight-forward chorus. The Howling Tongues prove their versatility for a final time swinging through sharply different textures without ever striking a single disjointed note. “50 Feet” definitely builds a head of steam quite unlike the preceding songs and deserves its slot as Live at Aggie Theatre’s closer. Beau + Luci’s live performance captured here is a rollicking ride from the outset and solidifies their reputation as one of the most gripping live acts working on the indie scene today.