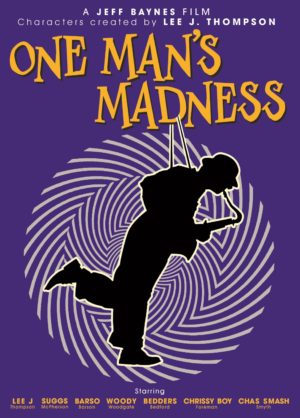 Over the years, the music documentary genre has become fairly predictable. There’s the childhood background story, the rise and ultimate fall of the musician or band (usually a result of drugs, inter-band squabbles or changing musical trends), followed by the relaunch after years of soul searching, all told though interviews with those close to the band. VH1 set up the template years ago with Behind the Music and a whole generation of filmmakers seems to be on autopilot recreating it again and again.

But, thankfully the British ska band Madness, who’ve bucked convention from the very beginning, continue their streak of non-conformity and bring it to the band doc. Platform.

One Man’s Madness, a documentary about Lee Thompson, co-founder of the band, their sax player and one of their chief songwriters, is an exercise in creativity. Yes, the doc is littered with interviews, everyone from Lee’s family, his bandmates and various managers, but you never see these folks until the final minutes of the film. Instead, Thompson, dressed in various costumes and wigs, lip synchs (sometimes horribly) the audio from each interview.

The ridiculousness of this spectacle is enjoyably compelling, at times laugh out loud funny and perfectly in line with what Madness as a band have stood for since the late ‘70s – irreverent, creative and above all else, fun.