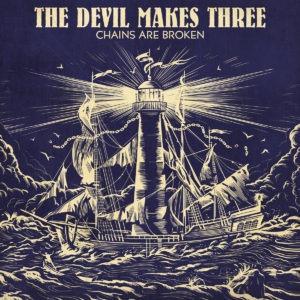 Hard to believe it’s been five years since The Devil Makes Three last put out a record of all-original material (2016’s satisfying Redemption & Ruin was a creatively curated covers album that spoke to a general theme). And it takes just one or two songs into their new one, Chains Are Broken, for you realize just how much they were missed.

Across 11 tracks, the Americana/Bluegrass vets lay out one of their strongest – if not best – records yet, from the hauntingly eerie Gothic “All is Quiet” to raucous fare like “Bad Idea” or “Need to Lose”.

The band brought in producer Ted Hutt – the secret weapon for a slew of punk rock and Americana bands for the past 15 years or so – and his deft touch here just adds to brilliance of the band. He has a talent for making music accessible without scrapping off the edges and authenticity. And this trio has authenticity in spades, going all the way back to their 2002, micro-Indie debut. In the years since the band has grown from a solid group to one of the most reliably flawless writers/performers of this brand of tattooed, no-fucks-to-give Bluegrass/Country/Blues/Americana. They somehow manage to be both keepers of the traditional flame while reinventing it with their own contemporary style. And “Chains Are Broken” is an example of the band in peak form.