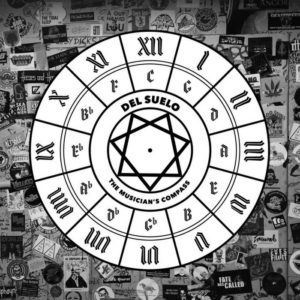 There’s quite a collection of musical voices on Del Suelo’s The Musician’s Compass: A 12 Step Programme. Erik Mehlsen, working as Del Suelo, is adept at chameleon like changes in texture, dabbling in a number of styles over the course of the album’s twelve songs. It’s to his credit as a songwriter, however, that the conceptual architecture for this album, illustrative of Mehlsen’s storytelling talents, is preserved despite the stylistic diversity. The opener “Second Encore” kicks off a storyline following a day in the life of a touring band and the obvious musical chemistry makes it slightly clipped melody stick even stronger in listener’s memories. The song starts off with a recurring device throughout the album, a smattering of sound effects, and the roar of a live audience accompanying the performance is a smart move and never overwrought.

I loved “Pack Rats”, an album single, on the first listen and fell deeper in love when I watched the video filmed for the song. It would be ideal if Mehlsen possessed the resources to make clips for each of the album’s twelve songs because the marriage of his songwriting with polished visuals and a video narrative enhances the power of his music. His guitar playing on “Pack Rats”, as well, will leave a mark on anyone who hears the song. It’s among the album’s highlights and the rock/funk influenced tone helps make it all the more memorable. The diversity mentioned earlier is in full evidence with the third song “Berlin Calling” and the fistful of punk rock inspired riffs gets to the point in short order and doesn’t go on for long. It’s indicative, in some ways, of the attention Mehlsen invests in getting things right with these songs and accomplishes more under two minutes than some songs pull off in four.

Some of Mehlsen’s sense of humor comes across in his clever takeoffs on iconic song and album titles. “A Lust Supreme” echoes Coltrane’s A Love Supreme and provides the audience with a bit of context for Mehlsen’s fictional band in their corner of the music world. Mehlsen employs the same device for titling songs on the following track “A Panic! at the Disco/the Fulsome Prison Blues”, the album’s lengthiest track to this point, and his skill at framing compelling contrasts, one of his music’s greatest strengths, works well here. “(What’s the Story) Morning Glory?”has a loose, folk-songy feel during some portions of the song and Mehlsen makes dramatic use of the song’s vocal melody – among the album’s best.

The pace picks up for the track “Caress of Steel Wheels”, another melodic gem with a streak of the unexpected, but the track’s insistent refrain has a lasting quality impossible to ignore. The travel imagery of the song’s lyrics and title is a natural fit for Mehlsen’s storyline and balances an entertaining musical tone with serving the overall narrative. Del Suelo’s The Musician’s Compass: A 12 Step Programme has a carefully selected track listing and there isn’t a discernible misstep in the way Mehlsen orders the album. “Darn that Dream/Stairway to Eleven” is, arguably, the album’s showcase piece and takes nearly seven minutes to give listeners its most dramatic lyrical and musical statement. I’m very taken with the atmospheric and aching mood of Mehlsen’s voice during the song’s first part. You’ll have to give this album multiple listens to fully appreciate everything Del Suelo is attempting to do here, but few albums are worth such an extensive acquaintance like The Musician’s Compass: A 12 Step Programme.