The Hard Stuff: Dope, Crime, The MC5 & My Life of Impossibilities 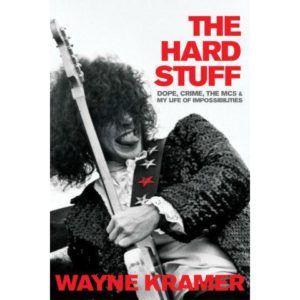 Wayne Kramer and his bandmates in the MC5 helped put down the foundations of punk rock, alongside fellow Detroiters Iggy Pop and The Stooges, paving the way for everyone from The Ramones to The Clash to make careers out of their music. Unfortunately, Kramer was in a federal prison in Lexington, KY, serving time for a botched drug deal when punk was just taking off. And at the time, the term “punk,” inside the walls of a prison was not what you wanted to be known as.

In his long-time-coming memoir, Kramer opens up about his tough childhood, being raised by his mom, after his dad took off not too long after his younger sister was born; nearly lifelong struggles with drugs and alcohol; his career as a robber and sometime drug dealer; but most importantly his role as guitarist and founding member of the legendary hard rock band, The MC5.

Throughout The Hard Stuff, Kramer refuses to shy away from his mistakes mixing drugs and alcohol and puts most of the blame on himself. Despite the near-universal knowledge of the line “Kick out the jams, Motherfucker!” the band is still criminally underrated. Kramer delves deep into the band’s founding and their role of mixing racial politics into their music’s message.   He also goes into great detail about his struggle to make it in music, long after people stopped talking about The MC5, at one point, working in cover bands in Key West to make ends meet.

Just as this autobiography is coming out, Kramer is hitting the road alongside guest musicians (including members of Soundgarden, King’s X and Fugazi) to celebrate the band’s 50th anniversary. A fascinating read even if you’ve never heard the band’s music before now.