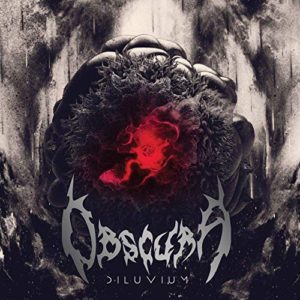 Few names in technical death metal actually stick around to be instantly recognizable in the genre, and with Diluvium, German sluggers Obscura find themselves genre veterans, often in the same breath as critically acclaimed acts like Necrophagist and Death. This new offering is the fourth and final chapter in the album-saga and is a direct sequel to the 2015 banger, Akroasis. Is Diluvium the crescendo of the story?

Right off the bat, Diluvium is possibly the most accessible record released by this four-piece maestro smorgasbord. In a saturated genre with songs running at maximum tilt with each new band trying to out-note each other, Obscura assumes a parental role, showing aspiring bands yet again, that at the end of the day, catchy sections and memorable choruses is what makes listeners come back for multiple lessons. Diluvium improves upon the legacy that Akroasis engendered, a focus on songwriting and melody without underplaying the prowess, ingenuity, and ferocity that is expected from technical death metal.  Songs like Clandestine Stars, Emergent Evolution, and Mortification of the Vulga are prime examples of songs that have plenty of punch and are still distinct.

New on Diluvium is an increased focus on post-production on the vocals, often involving using heavy autotune and vocoders on vocalist/guitarist Steffen Kummerer’s choruses, as can be seen on the aforementioned Clandestine Stars. When used as tastefully as Obscura, heavily synthesized vocals add an electronic and science fiction vibe, strengthening the overarching motif. Guitarists Kummerer and Trujillo (who joined Obscura with Akroasis) are experts at their craft, and show their deft by focusing on lower-register riffs and show mature control over the overly hammed lead work that usually permeates through the genre.

Make no mistake, Obscura is still a technical death metal band, and bare their musical fangs on plenty of occasions throughout Diluvium. Yet, it is their measured approach and restraint that truly makes Diluvium a special record worth every inch it occupies on your shelf!