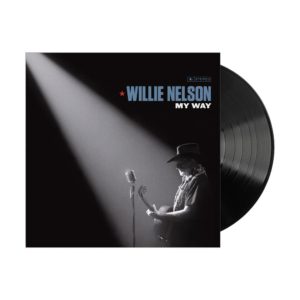 It’s been less than six months since the wildly prolific/national treasure Willie Nelson last put out a record, so of course he’d have another one out before 2018 ended. But unlike “Last Man Standing,” an album of new originals, “My Way” finds Nelson sidelined by another covers album, this one dedicated solely to the music of Frank Sinatra (much like 2016’s Gershwin album, 2011’s Ray Charles album, 2006’s Cindy Walker album and on and on…).

That’s not to say, “My Way” is a bad record – it isn’t. Willie Nelson’s distinctive vocals and his unique delivery and timing are all over this album, redefining these Sinatra standards more so than just about any other time, save that Sid Vicious cover of “My Way”. The problem here is the use of orchestration, like on the album opener “Fly me to the Moon” or the strings on “It Was a very Good year,” all threaten to eclipse the real charm of Nelson, his vocals and his distinctive nylon-stringed guitar playing. The songs that deserve the most attention are ones with most of the varnish stripped away, like on the title track (complete with harmonica, just like every great Nelson song) or the charming “Blue Moon”.

Though it’s not nearly as satisfying as a Nelson album with all originals, “My Way” still manages to allow most of his charm seep in. Thankfully, another album of all Willie originals is likely to be coming out soon.