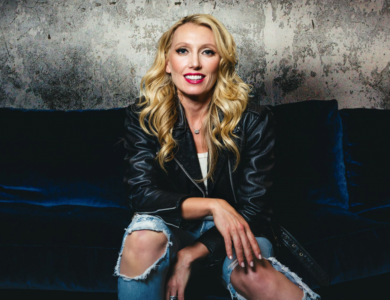 A furious drumming comes out of the darkness. It wants our attention and it will stop at nothing until it captures it. Synthesizers join in the volley, bouncing up and down as we near some sort of echoing hook that is teasing us off in the distance. Like a distress signal, a melody is crying out for us to notice it, even as we grind and grate in textures that are so gigantic that it feels like we could be crushed in between them. Like some sort of prophet reading us an incantation that will leave all within earshot spellbound by its words, Brooke Josephson begins to sing familiar verses. This is Rocky G’s remix of her song “Mr. Fix It,” and it came to shake the floorboards beneath our feet.

Brooke Josephson doesn’t play second fiddle to her producer’s whimsical experimentation in this remix, but rather stands out as the burning center of the rapidly growing flames that spark up the moment we get into the muscle tissue of the track. The bursts of harmonic noise that dot the landscape are like landmines that go off without expectation, but they don’t leave us crippled by their grandiose quality. This is as aggressive as we’ve ever heard Josephson before, but it isn’t her foray into the world of harsh ambient music by any stretch of your imagination.

With that said, an ambient influence is ever present in this song, and it really doesn’t feel out of place at all. Fans of the Josephson original will recognize what they’re listening to despite the fact that the grooves are much more intense than we could have imagined them being in any scenario. Rocky G favors conceptualism in the arrangement over predictability, and there’s actually a plethora of intricacies within this song’s structure that deliberately reject the standard route of travel even when it would make for a more efficient single. This remix wasn’t about simplifying anything, but rather evolving Josephson’s sound into the beast that it really can be.

The drums are so violent in “Mr. Fix It (Rocky G Remix)” that they create even more rumble than the bass does. This isn’t to suggest that the bass is weaker in this version than it was in the first mix; it’s indeed much punchier, but in an ironic twist I think it’s a little more disciplined here than it was previously. It adds to the tonality of the finished product, but unlike most electro/house tracks it isn’t the crown jewel of a scooped EQ.

“Mr. Fix It (Rocky G Remix)” is a rare case of a remix actually matching (and possibly surpassing) the creative structuring of the original, and it isn’t because of producer Rocky G alone. Brooke Josephson isn’t like the majority of the pop singers in her peer group; her voice isn’t chained to one particular style over another. I myself had thought she would work with this genre really well, but I couldn’t have ever guessed that it would go off as seamlessly as it does here. With Rocky G in her corner, she has the makings of being a serious contender in the club circuit as well as in indie pop, which is more than a big deal in this age of dominant crossover entertainers.