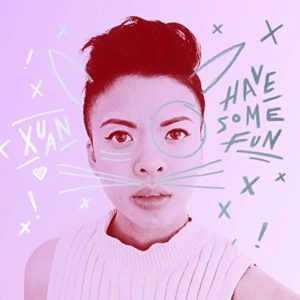 Well-traveled and educated by her worldly experiences, indie pop singer/songwriter Xuan emerges as one of 2018’s standout performers with her debut Have Some Fun, a 12-track treasure chest of modest ballads and striking melodies that will affect even the most discriminating of music fans among us. Xuan utilizes every bit of sonic space she’s afforded in her rookie LP, and whether we’re jamming out to the minimalist rock of “Big Blue Ocean” or the sexy sway of her Prince-inspired juggernaut “Sheila,” she makes certain that her sound touches on every one of our senses. Her lyrics are witty and ironic, but they’re not mean spirited in the least. Using what I can only imagine will become her trademark swagger, she discharges one rich texture after another and asserts herself as a serious contender in contemporary pop music.

The production of Have Some Fun is brutally crisp, to the point where I think it’s easy to pick out of a double-blind lineup. There’s an experimental edge to “Shut it Down” and “Night Drive,” but it isn’t conjured out of their structures. The mix is very raw and unvarnished, making every studded groove ten times the size of what we’re expecting it to be. This isn’t a problem though, because the music itself is actually quite subtle and charmingly straightforward. I’m sure that in a live setting songs like “We Were Just Talking” and “Break This Heart Again” would take on a much more pummeling shape, but in this format they’re so accessible and slender that I can’t imagine very many listeners not taking to them right off the bat.

As mentioned before, texture is a key component to Xuan’s alluring sound, and it’s yielded from a combination of contrast in the instrumentation and grit in the master mix. The mix does its job from behind the soundboard, but what the guitar and bass parts do is purely organic and compositionally sanctioned. Xuan darts in between the beats of “Ain’t Hurting Little Me,” “Last I Heard” and “I Wanna Know You,” and doesn’t mind brushing up against the strings, which are essentially dueling for our attention behind the bluster of the drums. A post-punk gloss similarly makes “Sheila” more thought provoking than it would have been without the touch up, and by the time we finish Have Some Fun one thing is very clear. Xuan isn’t just a dynamic singer and songwriter; she actually knows a thing or two about constructing a stirring listening experience on record (to put it mildly).

Xuan’s new album appeals universally to pop, rock and experimental music fans alike, not because it panders to populist tastes but because it does what few records have done in the last couple of years – it doesn’t try and conceal its identity with unnecessary frills. “Addicted to Your Game” makes sense because of the buoyancy in its main hook, and rather than trying to incorporate a lot of useless virtuosity Xuan lets the track play out like the simple, heartfelt electropop ballad that it really is. She’s confident and secure in her identity as an artist, and that will take her to the top of the American underground hierarchy a lot faster than you think.