The Cardigans – First Band on the Moon [Remastered Vinyl Re-Issue] 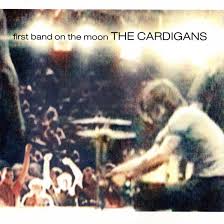 In the rush to pander to the twin gods of Gen X Nostalgia and the booming Vinyl Resurgence, re-release mania has led to some truly questionable offerings over the past few years. 311, Godsmack, The Space Jam soundtrack… But, occasionally, inside the record label vaults, on a long-overlooked shelf, the beauty of a long forgotten album is found. Such is the case with First Band on the Moon, the third album from the Swedish pop band The Cardigans.

The record went on to become a best-seller in several countries, after its initial release, including 664,000 copies in the U.S. (a genuine hit in 2019, but little more than one-hit wonder status in the mid-1990s). Universal has finally released a gorgeous 180-gram vinyl, fully remastered, gatefold version of this album. Though “Love Fool,” justifiably is the song the band is best remembered for – a perfect three-minute distillation of strong hooks, sweet harmonies and lush vocals – the record is crammed with other great tracks that never fully got their proper due. Top among them, the urgent “Never Recover,” the trippy “Step on Me” and the infection “Been It,” (quite possibly the band’s best song). The album also hides the seemingly embarrassing, but ultimately (after several listens) impressive Sabbath “Iron Man” cover.

Original vinyl copies of this Cardigans record are going for over $100 online, thanks mainly to the fact that the format was in deep decline here in 1996, so not that many were pressed. But, bargain hunter and more importantly pop fans rejoice, this (reasonably priced) vinyl re-release of the oft-overlook mid-1990s pop music gem is finally getting it’s due.