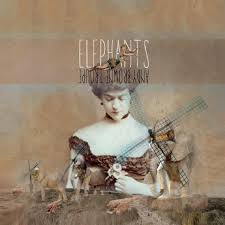 There’s a bit of foreshadowing in the opening track from the Andy Browne Troupe’s latest LP, Elephants. On “England,” over a hypnotic synth line, Browne namechecks a slew of greats – everyone from T Rex and Bowie to The Clash and The Beatles. He could just as easily be listing off his influences as brief snatches of most can be heard throughoutElephants, a textbook example of a great rock record that somehow refuses to be pinned down to one specific sub-genre.

Elsewhere throughout the album, you can also hear the influences that range from the more obvious –  R.E.M. and The Replacements (bands that Browne shared stages with in the ‘80s as part of Atlanta mainstays The Night Porters) – to more subtle guidance from folks like Grant Lee Buffalo and Peter Gabriel’s World Music records (especially on songs like “Warriors Don’t Cry” and “She’s Only Human”). But make no mistake, while Browne may share common musical themes here and there with some of his contemporaries and heroes, he manages to create a deeply original sound of his own on Elephants.

Browne fled the south for Los Angeles in the ‘90s, ended up in Philly in the ‘00s and has recently returned to Atlanta, having recruited new band member and recorded this new record, shortly after the also stunning Zazel. Elephants, at its heart, is a rock record, but Browne and company take the rock foundation and adorn it with brass, gorgeous soaring backing vocals and snatches of jazz and soul.

Throughout the 1980s, Athens and Atlanta bands like R.E.M., Pylon, Drivin’ N’ Cryin’ and The B-52s all justifiably were ushered onto a much larger musical stage. The Night Porters unfortunately never got that call. Here’s hoping The Andy Browne Troupe gets the chance at much larger audience that they so obviously deserve.