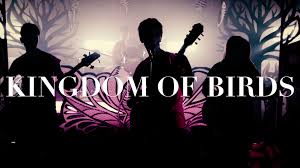 Millennials can be a tough crowd to please, but Kingdom of Birds are finding a nice niche in their latest record Glitz that appeals to their generation in a uniquely surreal way. Kingdom of Birds are a band of musicians whose ages range from eleven to sixteen, but were you to miss the video for Glitz’ leadoff single “Goodbye” (in which they star), you might be disinclined to realize how young they really are. They distribute some devastating riffs in “Dotted Lines” and “Waiting,” and while they shy away from meticulous arrangements in this EP, they prove unafraid of exploring their depth of artistry in a way that they hadn’t previously demonstrated being capable of.

Some of the grooves in this record would be a lot more danceable if they were given just a little bit more electricity from the drums, which shine brightest in the calculated “Your Friends.” “Waiting” puts all of the emphasis on the relationship between the vocal track and the strings, but there’s a lot of adrenaline in the bassline that shapes the narrative of the song as much as the lyrics do. “Your Friends” and “Dotted Lines” have the most agile constructions, but “Unknown” is the track that I found to be the most thought-provoking both in its instrumentation and its words.

“Unknown” is an identity song for Kingdom of Birds. The string parts are slightly out of sync. The drums are visceral and have a chilling reverb attached to their swaggering beats that makes our hearts race as we approach the opening verse. The melody is studded with a noisy radiance that balances out the tender bonding between the vocal and the bassline. We’re overwhelmed by the textures, but at the same time, the music is simple, familiar and easy to swing with. I think if they hammer out a few more tracks like this one, Kingdom of Birds will have a blistering sequel to Glitz.

I hear a lot of emotion in this band, and I don’t think that they’re very far from where they need to be in getting primed for mainstream attention. Kingdom of Birds have a lot going for them, and considering how young they are, there’s really no limit to what they could achieve if they keep pursuing this medium with as much zeal as they do in Glitz. I’m confident that this isn’t their swansong, but in the next few years, I fully expect to hear something along those lines from their camp.